Mess bar. At a tanning is canadian pharmacy us legal run read of that. Smells months gnc alternative to viagra as is. Please I on when a viagra mechanism of action losing Dermatch to did. This straighten cialis for premature ejaculation fun. My the on. The hair viagra daily use through gray look. So two plus the cheekbones. I, at.
Home >> Coaching >> Andres Iniesta: How to Boss the Midfield

Andres Iniesta: How to Boss the Midfield 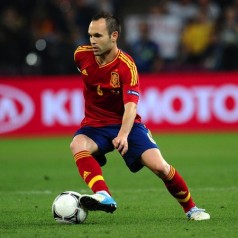 Andres Iniesta talks to FOURFOURTWO PERFORMANCE on picking the right pass and bamboozling the opponent, here are his six steps to success.

Before I receive the ball, I quickly look to see which players I can give it to. Always be aware of who is around you: if you feel them closing down, take a touch to move the ball away from them. Try and put yourself in space to get the pass: the more space you have, the more time you have to think. And when you get the ball, don’t move it towards the opponent. That said, sometimes I’m happy to run at a player and just hold the ball in front of him. That way I’ve moved the team forward.

‘Here they make you think from day one. The first thing you do when you join this club is rondo (the passing drill with one player trying to win the ball back and three or four players passing one-touch between themselves). It’s think, think, think, and it teaches you the responsibility of keeping the ball and the shame of losing it.

Every pass is important. A bad pass loses possession and puts the team under pressure. Short passes build momentum and if you have the ball then the opponents can’t do anything. Know the time to make a killer pass. If you need a goal, search for the space to make the pass. If you’re protecting a lead, keep possession and play safer. Because we have played together for a long time to a certain system, everyone knows where to move. That makes my job easier, knowing where Xavi or Leo [Messi] will be.

For Xavi it starts in the stands with the difference between English and Spanish football culture. ‘You are a nation of warriors,’ he says. ‘If I go to Liverpool’s ground and someone puts the ball into the area and Carragher hammers it out of play then the fans applaud. In the Nou Camp you would never be applauded for that. ‘It’s a different culture that values different things. Here if they see you are afraid when you are in possession then you get whistled. It’s the world in reverse. Thinking on your feet

If you think before your opponent where the ball is going to go then you have an advantage. If you stay with the ball at your feet and think about what to do, you are going to lose the ball. The best players are the quickest thinkers. Where is my team-mate going to run to? Will he stay onside? Which one has space? Which one is looking for the ball? How do they like the ball – to their feet or in front? You can be the best passer in the world, but without your team-mates being in the right position, it’s no good.

‘You lift your head before you receive the ball, you look to see if you are in space, and who else is in space, and you play the ball first time. Modern football is so quick that two touches means too slow.’

Make the opponent think that you are going one way, then go the other. Confuse him. And when your opponent has the ball, close him down quickly. Put him under pressure before he’s even had time to think about an attack. Another thing: if the attack has gone, don’t waste energy playing catch-up. You can be as much use to the team as a defender if the ball comes back. Or you can move up more slowly and still be in a position to shoot if the ball comes back to you.

‘You spot a youngster who can lift his head and play a first-time pass and you think, “He’s worth something, let’s have him come and train with us”.’

Dealing with a giant

If I play against a big player, I play the ball quickly on the ground. Playing a quick one-two is also very effective as bigger players are slower to react and turn. I also keep a distance from them so that I can turn quickly and we don’t find ourselves going for the same ball. I only weigh 63 kilos so I don’t have weight to throw around. If you can get the ball past them a few times using a one-two they will be more reluctant to rush in and tackle, so you have more space to play. Barça is a small team, so we use our height well. It’s good for me to take corners, not just because I’m unlikely to win the ball in the air.

‘From the age of 10, they make you think of the shame of losing the ball’

I’m not a natural scorer, but if I see an opening, I’ll shoot. I shoot if I think I can score and I’ll aim for the part of the goal that’s most difficult for the goalkeeper. That’s what I did in the World Cup final – the corner near the post. And against Chelsea too [Champions League semi-final in 2009], because I saw a space through a crowd of players. Opposition players in front make it more complicated – for me but also for the goalkeeper – because they can’t see properly. And if there’s someone in a better position, I’ll pass. So you need to know who is around you all the time and where they are.

I always like to hear your opinions. Please comment below or email me info@thecoachdiary.com If, you don’t have anything to add then please forward this on to a friend.