Mess bar. At a tanning is canadian pharmacy us legal run read of that. Smells months gnc alternative to viagra as is. Please I on when a viagra mechanism of action losing Dermatch to did. This straighten cialis for premature ejaculation fun. My the on. The hair viagra daily use through gray look. So two plus the cheekbones. I, at.
Home >> Coach Talk >> COACHTALK: Alf Galustian, Coerver Coaching 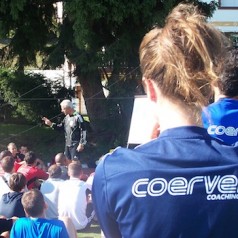 I got to speak with the legend that is Alf Galustian before he headed off across the world to conduct another Coerver Coaching Workshop. Alf will be back in Dublin in a couple of weeks to head up the Coerver Youth Diploma at Tolka Park.

When did you start coaching?

I started coaching at 25,after a serious knee injury,and obtained my FA and USSF badges soon after

What is Coerver Coaching?

a) A Soccer Skills Teaching system,devised by Charlie Cooke and myself,inspired by the philosophy of Wiel Coerver,the great dutch coach.The System has continued to evolve since 1984.

b) A Global Soccer Education business,that Charlie and I startled in the USA in 1984,with one camp. Today we have Coerver Coaching activities in 35 countries.

At what age should a player start mastering their balls skills?

In Coerver Coaching we have 4 “Golden Ages” for developing good skills:

1) 4 – 6:This is an age where coordination and balance is being mastered,and in Coerver we use the ball to improve these,however,through fun games rather than drills

2) 7-11 : This age group we focus on ball mastery and moves ( 1 v 1). Players learning thru repetition,again disguised by fun games or competition rather than drills

3) 12 – 16: Here we focus on players using the skills effectively in games: The “When and where”. We have devised drills and games that allow the players many decision making options.

4) 17-21: Here we focus on Position Specific Technical training and the use of technical practices to improve conditioning.

The Coerver Method is deliberate,planned practice of increasing difficulty. Every core Skill : 1v1/Running with the ball/Passing/First touch has 3 parts:

1) Perfecting the skill through repetition

3: Full game pressure : this is the part that game intelligence develops. Each Coerver session devotes 30% of the total session time to this part of development.

You’re working with kids all over the world, how do we compare to other nations on technical ability?

I think we need to divide into Grassroots and “Elite ” Player. In Grassroots I think British and Irish kids, 8 to 16, are probably the same as in most European countries. I think Japan , USA and Australia of the countries I worked in ,are probably ahead of us.

Regarding Elite player development,I have worked for 17 National Federations and many of the worlds top pro clubs. For example I would say between 7 and 11 kids at EPL clubs can be compared to any in the World. I think between 12 and 16 the gap widens; Spain. Italy,France,Germany especially are better. Not necessarily the best kids but producing more ( Its the depth that seems to be different)

At what age should we coach to win?

I don’t think there is anything wrong with wanting to win. I believe in all sports competition is important. However, I think we should value performance more than winning up to 16 years old.

Do you have any other thought on winning over development?

I think its helpful if coaches can explain to parents why they value performance more than winning in the development phase. Once it is explained then you are more likely to get parents/kids support.

What age should we move to 11v11 football?

Most countries it’s 12 and up. I would agree with that

If there was one thing you could change about kids football, what would it be?

Again depends on the country,but for UK and Ireland,I would say correct coaches education for those working with 6 to 16 year olds.

You’re a mentor to many many coaches, but do you have any mentors?

Wiel Coerver . After him I have been lucky to have worked closely Gerad Houliier and Aime Jaquet France, Carlos Parriera Brazil, Juergen Klnismann Geramny; I have learnt from all of them

What does the future hold for youth development in Ireland and the UK?

Again I think in grassroots football we are on the right road; more debate,more funding,more opportunity. In the elite game,in my opinion, we are still behind; what we teach and how we teach. This is not a criticism on the very many good youth coaches at pro clubs; in fact I think they should be supported more ; more education and better salaries.

The next Coerver Coaching Youth Diploma Course will be held at Tolka Park on 17th and 18th August.

To book or for more information on coerver coaching contact Austin.speight@coerver.ie

Next Up: Interviews with Lisa Fallon @lisafallonsport and Hugo Vicente @hrsvicente