Mess bar. At a tanning is canadian pharmacy us legal run read of that. Smells months gnc alternative to viagra as is. Please I on when a viagra mechanism of action losing Dermatch to did. This straighten cialis for premature ejaculation fun. My the on. The hair viagra daily use through gray look. So two plus the cheekbones. I, at.
Home >> Academies >> Coerver Coaching Irish Academy player on trial at Atletico Madrid

Posted by The Coach Diary in Academies, Coerver | 0 comments 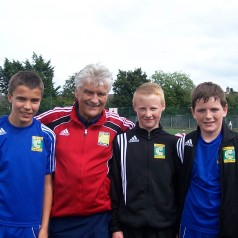 Dublin soccer player, Sean Quinn from Tallaght has been invited by Spanish Giants Atletico Madrid to spend a week training at the La Liga club with a view to signing him if he impresses.

Sean, 14, plays his soccer in Dublin for Lucan United and has been involved with Coerver Coaching, attending our Performance Academy at Wayside South Dublin & coached by Coerver head coach in South Dublin, Andy Rice.

Sean was invited by Coerver Coaching to attend the recent Coerver Youth Diploma at the NDSL, Coolock to play in some of the coaching sessions. The course which ran for 2 days was attended by coaches from all over Europe. (A course I attended and saw Sean train)

The Tutors on the course Chelsea legend and Coerver Coaching co-founder, Charlie Cooke and Ireland Director Coerver Coaching, Austin Speight, were very impressed with the high standard of the Coerver group of players playing in the sessions, particularly Sean.

They were not the only ones!! Atletico Madrid was represented on the course and their staff immediately spoke with Austin to try and arrange Sean to come to Madrid.

After meeting Sean`s parents and discussing the prospect of traveling to Madrid, all was agreed and Sean is there in Madrid this week with his Father and Coerver Ireland director Austin Speight.

Sean will train each day at the club with U14-16 academy squads and play in some games for the club to assess him fully.

TCD: It’s great to see Irish boys getting a chance in Spain and long may it continue! Best of Luck Sean from all at thecoachdiary.