Mess bar. At a tanning is canadian pharmacy us legal run read of that. Smells months gnc alternative to viagra as is. Please I on when a viagra mechanism of action losing Dermatch to did. This straighten cialis for premature ejaculation fun. My the on. The hair viagra daily use through gray look. So two plus the cheekbones. I, at.
Home >> Academies >> An English Academy 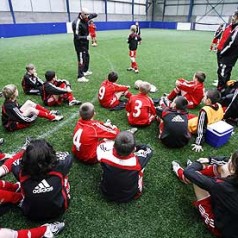 A club invites you to join its Academy. What happens now?

Paul Holder, former assistant Academy director at Crystal Palace and assistant director of the David Beckham academy and currently a National Coach with the English FA.

What exactly is an Academy?
Academies are special training schemes set up by clubs to help them develop young players. All Premiership clubs have them.

Other League clubs run either Academies or Centres of Excellence, which are run along the same lines. Many non-league clubs also run their own development schemes or community projects.

Do I have to be a certain age to attend an Academy?
A player must be at least nine years old to join an Academy, but many clubs – such as Arsenal – have development groups which cater for even younger players.

Does it matter where I live?
Yes. Strict new rules have been brought in to prevent clubs signing young players who live outside their catchment area.

Under 12’s must live within an hour’s travelling distance from the club, or 90 minutes for players aged 13-16.

What happens once a club agrees to take me on?
Between the ages of nine and 16 you will be asked to sign schoolboy forms. These will be renewed every year or two years, if the club is happy for you to continue.

Once you’re 16, the club will then decide whether it wants you to stay on and join its Youth Training Scheme. Places are limited, though. For example, Crystal Palace take on about six trainees every year at this stage. Some clubs take on more, some less. If you are one of the lucky ones, you will be offered a scholarship.

This can last up to three years, during which time you should progress from the Academy’s Youth team to the Reserves. Premiership clubs also have Under-21 teams to bridge the gap between the reserve team and the first team.

Technically, you can sign a professional contract at 17. But Wayne Rooney is the exception rather than the rule.

Most players will have to wait until they are 19 before finding out whether they have a future at the club.

Life at the Crystal Palace Academy,

On Sundays, they play matches against other Academy teams. That could mean up to 28 games a season. 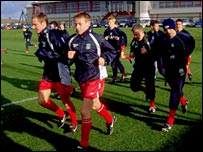 Players are given practical homework such as training drills they can practice at home. Their parents are also given advice on things like nutrition and mental preparation. Agility is very important too.

So, while the players can practise their football skills at the academy, we’ll ask their schools to make sure they take part in other sports such as gymnastics or basketball.

When he’s approaching 16, the club will sit down with the player and his parents to decide the best way forward.

If the player is offered a scholarship, he’ll more than likely move to live in digs near the club.

He’ll be expected to continue his education, though, and will be offered various courses such as A levels, BTecs or GNVQs at a local college.

He’ll also be expected to do some jobs around the club, such as collecting the kit and taking it to the laundry.

What if I’m rejected?

You’ve got to be realistic.

Just think. How many new young players does a club like Liverpool or Arsenal sign every season?

The answer is very few.

The fact is that most trainees will never make the grade. Trainees released from scholarship schemes are put into a central pool which allows other interested clubs to come in for them. And former Fulham scout Roger Skyrme believes there’s nothing wrong with lowering your standards.

“Never lose faith in your ability, but do be prepared to move down a level,” Roger told BBC Sport.

One example is Darren Peacock, who was rejected by Bristol Rovers before being taken on by Newport County.

He eventually went on to make some 200 Premiership appearances for clubs such as QPR, Newcastle, West Ham and Blackburn.

Interview conducted by the BBC with Paul Holder