Mess bar. At a tanning is canadian pharmacy us legal run read of that. Smells months gnc alternative to viagra as is. Please I on when a viagra mechanism of action losing Dermatch to did. This straighten cialis for premature ejaculation fun. My the on. The hair viagra daily use through gray look. So two plus the cheekbones. I, at.
Home >> Irish Grassroots Football >> Graham Taylor fears for the English game’s future 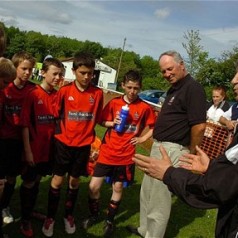 Meeting a bunch of young footballers who were still toddlers when he walked away from his last job in football management at Aston Villa,

Graham Taylor sought to break the ice with a gag.

“How many legs has a dog got?” he asked the group, gathered on a playing field in the Birmingham suburbs.
“Four,” was the reply in unison.
“If it lifts one leg off the ground, how many does it have now?”
“Three.”

There was a pause, then a collective groan at the realisation at what they had just said. Taylor grinned hugely, punched the air and did a little jig of triumph, delighted to have caught them out.

“Watching the former England manager in action as he visited a youth football club was to see an enduring football devotee at work”.

Chatting amiably, imparting wisdom, offering tips on keeping your head up or – to the older boys – treating the ball with the same care and attention you might your girlfriend, was to see someone still deeply in love with the game more than 60 years on from first engaging with it. And this despite that these days he earns a living working alongside Alan Green on Radio 5 Live.

“The best player I ever worked with?”

he said when a small boy asked him the inevitable question. “Paul Gascoigne. When you saw Gascoigne you saw someone who was what I would call uncoachable. And as a coach, I loved that.”

Not that Taylor is entirely thrilled with the direction his sport is heading. After he had finished his coaching session, after he had posed for pictures and chatted with a woman whose friend was a landlady for Villa’s young professionals and would have killed her had she seen Taylor and not mentioned this fact, he explained his concerns over a cup of tea in the clubhouse, supplied by a smiley volunteer.

“I have to choose my words carefully,” he said, “because I don’t want to sound like one of those who goes on about how things were better in my day. In many ways football has never been better, the pitches, the fitness, the Premier League is fantastic, what a product. But I do worry, yes I do.”

The state of the game’s foundations is particularly exercising him. For the past four years he has been the star attraction at the Grassroots Football Show, spending a June weekend in Birmingham encouraging amateur coaches and players in seminars, lectures and practical sessions. The more he gets involved, the more alarmed he becomes about the state of football at its base.

“It’s been a lovely day today, the enthusiasm of the kids, the coaches, the parents, brilliant. That lady at the tea bar, fantastic. But if I’m honest, just look at that pitch they were playing on. I mean, shocking. Bumpy, patchy grass, full of holes. Look at this pavilion,” he said, pointing into the dark, fusty corners of the creaking old clubhouse.

“You go to Holland, France, Germany, every community, the tiniest village, they have magnificent, pristine sports facilities. Here, we’re struggling by on pitches that are a disgrace. Yet we’re told the game has never been richer. You have to ask yourself: why?”

It is a good question. Why is it that Manchester United can announce record turnover yet the schools in the shadow of Old Trafford barely have a football pitch between them? Why is it that Aston Villa’s training ground just up the road from where Taylor was speaking has pitches manicured as if by nail scissors, yet the surface on which the youngsters of the area are obliged to play puts them in danger of turning an ankle?

Divorce between the both

“There is definitely a divorce between the professional game and the grass-roots,” he said. “Having spent my life working in the game, I can understand to a certain extent that when you are in the professional game, working as a player, coach or whatever, then your mind is geared so much to the winning, you don’t get any sense of the bigger picture.

“And I do know some within the game are aware. The Football Foundation would have every pitch in the country improved if it could. But it’s just had its budget cut. What’s that about?”

Indeed, there are many in community departments at clubs such as Manchester City, Everton and Charlton Athletic working tirelessly in the attempt to bridge the gap to the local area from which they sprang. But community budgets are being slashed across the country. That seems odd given that the game’s income at the top increases every year.

No Money for the communities…

“In the Premier League you’re guaranteed what, £50million minimum a season, yet we’ve got all these clubs in debt,” said Taylor. “And because they’re in debt, they say they haven’t the money to help their communities.”

Taylor has a theory as to how this has happened. “The biggest thing I’ve found since I left the game – and I’m glad I chose to leave rather than being sacked – is that so many people are in football for the wrong reasons. Not because they love the game, but because they smell money.

“People complain about the players being paid so much – and, yes, there are too many what I’d call mediocre millionaires. But how much are these chief executives and directors and so forth being paid and how much do they know about the game?”

It is a shame, perhaps, that he is no longer involved. “I got out with my dignity, if not my sanity intact,” he said with a smile, recalling his final days at Villa, when he cited the game’s financial pressure’s for his sudden departure. Now he would prefer to dwell on his success at Watford, whom he led from the fourth tier to the first. “Looking back, what I’d like to be remembered for is making Watford a family club. The supporters were so close to the players, it was such a close-knit thing there.

“Now you see with stuff like the booing at Arsenal or the fight at the West Ham party, there’s been a barrier put down. It’s such a shame. Football needs its roots, it needs its connection with the supporters. But those in charge seem to think they can do without them.” And that, sadly, is the problem defined in a sentence.

Article By Jim White the Telegraph

The System is the problem – “Do I not like that“

I reckon their is more to the problem then just manicured pitches, the problems lies in the grassroots coaching and development of kids. They way we coach kids in Ireland and England is totally different to the way they coach kids in Europe. For instance Technique and ball mastery are the number one goal at the early ages, do we do enough in Ireland in this department? “I say, no”  the Winning at all costs and competitive leagues is a huge issue. Also aspects of the game should be introduced gradually as they go up the age groups and smaller numbers on the pitch so that kids get more touches of the ball, again extra numbers gradually and it must be age specific.

For us to succeed and improve the level of the game hear, we need to change our entire psyique without losing our identity. In other words, create a plan which is the journey and then have a destination which is the goal of how our national teams plays. England has fallen further behind and our best players go to England. If I was a pro footballer my dream would be to go to Spain, France, Portugal, Germany, Holland in these countries you have a chance to become a master of the ball, you will have a chance to succeed. We need to be looking at Europe not England.

This weekend you can discover the Ajax way at Johnstown House Enfield Co.Meath The FCAI are doing a 2 day workshop for coaches. Hope to try and make it!