Mess bar. At a tanning is canadian pharmacy us legal run read of that. Smells months gnc alternative to viagra as is. Please I on when a viagra mechanism of action losing Dermatch to did. This straighten cialis for premature ejaculation fun. My the on. The hair viagra daily use through gray look. So two plus the cheekbones. I, at.
Home >> Irish Grassroots Football >> Horst Wein: How To Develop Creative Potential Within Each Child

Horst Wein: How To Develop Creative Potential Within Each Child 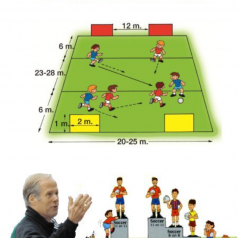 Horst Wein,  first coach to be awarded the title of FIH Master Coach, was born in Hanover, Germany in 1941. In this post we share some of his teaching as we remember as one of the greatest Children coaches in hockey and football of all time.

Horst has majored in the ground-breaking concept of Game Intelligence, since 2002, having written and lectured extensively on the topic in four continents.

Wein was one of the deepest and most influential thinkers within the game. He was one of the first to strongly argue in favour of smaller-sided games (although he prefers the term ‘simplified games’) for younger players; views that everyone now seems to be accepting and enthusing about but which were considered as idiotic for a long time..

1) DECLARE THE WAR AGAINST THE 11 VS. 11 GAME
In the “big game” on a regular field, the young player is generally condemned to become passive, participating very seldom in plays where he can exhibit his creative skills.

2) MORE GAMES AND LESS ANALYTICAL EXERCISES
Children should be exposed to more game plays (global method) and less practice with the analytical method. The practice should happen in the game.

3) LET THE KIDS PLAY
We should give children the opportunity to explore and to discover through “playing”, to infect them with the creativity shown by their teammates and opponents and without having the coach interceding frequently.

4) PLAY IN ALL POSITIONS AND IN REDUCED SPACES
Young players up to 13 years “should have the opportunity to play in different positions in order to discover the roles and functions which these positions characterize”.

5) YOU MUST ENJOY THE GAME TO BE CREATIVE
When the children play, they should have fun and be keen on the game. If the young player does not identify himself with the proposed game that the coach has designed, the creative capability will remain asleep.

6) LET THE PLAYERS CREATE GAMES AND RULES
Frequent rule changes, introduced by surprise during the practise of the game, force the players who want to win to adapt to the rule changes, using their creativity.

7) DARE TO TAKE RISKS AND TO IMPROVISE
The young players, especially those of 7 to 12 years, should not be pressured by their coach to quickly pass the ball in order to allow a better team-play and winning. They should frequently have the opportunity to “be in love with the ball”, to dare to improvise their play and take risks, without fearing the possible consequences of having committed a mistake or to have lost the possession of the ball.

8) TRAIN THE RIGHT HEMISPHERE OF THE BRAIN
Instead of the coach being the main character in the teaching and learning process, he should often transfer responsibility to his young pupils and ask them, through systematic questioning, to solve most of the situations that he presents. A true master in teaching never gives the answers to the problems, but helps his pupils to find and discover them on their own, guiding them to correct results.

“Let The Game Be The Teacher” – Horst Wein

9) CREATIVE COACHES = CREATIVE PLAYERS
Any flash of creative behaviour in a player should be recognised by the coach who should do everything to encourage his players to be different and to look out for original solutions to the problems inherent in the game.

10) THE ENVIRONMENT AS AN ENEMY OF CREATIVITY
The environment of the young player is an enemy of his creativity. Nowadays most of our young talent grows in an atmosphere which is noticeably hostile towards creativity. Their familiar and scholastic surroundings, especially between the ages of 7 and 14 years, are characterized generally by a “intentional direction” of learning (with strict norms), which is limiting personal initiative, independence, originality and the value of trying to do things in different ways. Basically: “instead of presenting fishes to the children, the students, or the players, the parents, teachers and coaches should teach them how to fish.”