Mess bar. At a tanning is canadian pharmacy us legal run read of that. Smells months gnc alternative to viagra as is. Please I on when a viagra mechanism of action losing Dermatch to did. This straighten cialis for premature ejaculation fun. My the on. The hair viagra daily use through gray look. So two plus the cheekbones. I, at.
Home >> Irish Grassroots Football >> Coaching your own child – The parent-coach, child-player relationship.

Coaching your own child – The parent-coach, child-player relationship. 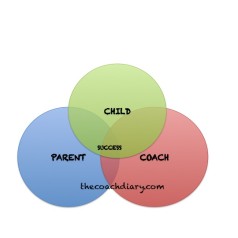 As many as 90% of all volunteer coaches are parent coaches. There has been 2/3 major studies in this area of coaching both showing positive and negative results.

So many coaches start out as regular parents standing on the sideline every weekend cheering on their son or daughter. Little did they know that several days later they would be handed the club jacket, a list of players, parents details, some football, bibs, cones and a good luck and big pat on the back.

It can very daunting for someone who has never kicked a ball in their life and now has the task of managing and coaching a bunch of kids. Not many people will get the opportunity to coach their own kid, which can be a wonderful experience working together.

Many look back on this experience as the best moments in their lives but many kids also back on it as a very difficult time and in many cases – one that they would rather forget.

The Butterfly: There was a great story about a young boy who observed a butterfly unable to emerge from a cocoon. The butterfly appeared to be struggling and in pain. He rushed into the kitchen and brought out a scissors. He carefully snipped the cocoon open and the butterfly was free. But the butterfly’s wings where twisted. He later learned, the struggle and pain the butterfly must endure to emerge from the cocoon were necessary for it to fly. This story is so relative to how children learn, grow and deal with struggle and disappointment. Sometimes we just need to let them figure it out for themselves and not be so quick to propel them along.

Here are some tips I’ve learnt for making the joined experience a much more positive one for all concerned:

” One positive aspect includes being able to spend quality time together. Additionally, the child perceives that he/she gets special attention, praise, and perks, such as being on familiar terms with the coach. In the child’s perception, having your parent as a coach is an opportunity to receive motivation and technical instruction that others on the team do not have. In the perspective of the parent, being both coach and parent provides the opportunity to teach values and skills, the opportunity to see how their child interact with friends, and the ability to see their child’s accomplishments and take pride in them” – Weiss & Fretwell 2005

Your time coaching your own child will pass by quickly, so make sure both of you are having a positive experience at all times. Don’t let winning get in the way of your decisions. Sport is a wonderful avenue to help your children learn valuable life long lessons. Do your part to insure that these lessons they are learning are constructive, positive and most importantly FUN! This is no easy task – so don’t be afraid to speak to other parent coaches and get their perspective on things both good and bad.

Weiss & Fretwell study also showed the negatives side for all concerned such as:

These studies have limitations and cannot really be generalised to the whole population of parent-coaches and child-player. A small number of participants participated and they had not quite reached adolescence or who were just hitting adolescence. It was not the highest level of competition. The last two factors could affect the amount of pressure and anxiety perceived by the children.

Finally, try to act on the sidelines in a way that would make your son or daughter proud to have you as a parent and a coach. Remember, your child is not the only one that’s performing during the game (don’t follow them around with a spotlight over their head). You are also a performer (A SILENT ONE) and the quality of their experience is firmly in your hands. Conduct yourself in such a way that you clearly communicate to your child and those around you that this is just a recreational game for children, played by children because it’s FUN. It’s unlikely any of these kids will turn professional even if they believe in the dream. One thing is for sure these early years of participation are some of the best years of these young players life’s and it is our job to make sure these years are just that……… And always remember children don’t value winning as much as adults do. The most important thing is they do their best (give their best effort) for the team, each and every time they play and train.

I’ll finish by saying that without parent coaches we would have no game and most teams wouldn’t even exist. My advice is don’t coach your own child forever. It’s great at the younger ages but there is a time to step away and just watch them play. I would suggest that you devote some of your time to just being a dad or mum (supporting from the sidelines) and when it’s time to let go (as the coach), let go or else you might lose them forever.

Do you coach your own child? Have you any advice for parent/coaches?

This is for you Joe!

I always like to hear your opinions and views especially parent-coaches. If you feel you have something to say, please comment below or email me info@thecoachdiary.com If, you don’t have anything to add then please forward this on to a friend. As always, thanks for reading.