Mess bar. At a tanning is canadian pharmacy us legal run read of that. Smells months gnc alternative to viagra as is. Please I on when a viagra mechanism of action losing Dermatch to did. This straighten cialis for premature ejaculation fun. My the on. The hair viagra daily use through gray look. So two plus the cheekbones. I, at.
Home >> Coach Talk >> COACH TALK: Pedro Dias (Sporting FC Toronto) 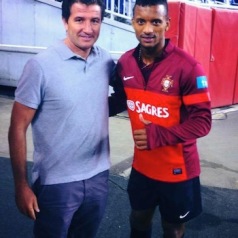 Pedro a former professional footballer who retired due to injury after 15 years in the game. Pedro has been coaching for over 10 years in Portugal, the USA and Canada.

TCD: Talk to me about your love for football, when did it begin?

PD: Since I born, I guess….lol I grow up playing soccer in my street with my friends and peers… It was a way of life, natural.

TCD: You played for Sporting Club Portugal the 2nd biggest sporting club in the world after FC Barcelona. When did start playing there?

PD: I start my soccer career at Petrogal (U10) and then I play for Sacavenense (U14). Until I was scouted to try out at Sporting, and I made it. It was a new world for me and change my life. By that time, Sporting have the old stadium and the conditions were very different from now, but the coaches, players and staff make all the difference. It was fantastic playing beside Figo, Peixe, Porfirio.. and I have the opportunity to excel my qualities and sign as a professional Soccer Player at Sporting CP.

PD: While I was playing, I decide to start my coaching education, I had 2 Acl´s operation and I start thinking in my next step. I have the passion and the drive for it, so it was a very natural process.

TCD: What is your current role at Sporting FC?

PD: Im the Technical Director and Head Coach and I also run international programmes outside of Portugal. In my current role of Youth Technical Director and Head Coach at Sporting FC Academy, I am responsible for the day-to-day operations of a soccer academy for new/inexperienced players, as well as a competitive program consisting of 8 age groups – U8, U9, U10, U12, U13, U15, and U17.  I currently lead a technical staff of 16, in delivering the OSA’s Long Term Player Development strategy to develop young players properly and to their full potential.

In addition to my coaching responsibilities, I oversee all administrative duties for the club, including: developing technical curriculums & manuals; overseeing recruitment and on-boarding of new players; and managing internal/external communications & marketing.

TCD: What is the most important skill for a coach to have?

TCD: How long as SFC been in Toronto and what is the clubs philosophy?

PD: Sporting FC is a youth soccer academy opened in 2011, operating as a non-profit organisation in Toronto, Ontario.  Our club serves the broader GTA community, and has a membership base of approximately 300 athletes ranging in age from 4 to 18 years.  Sporting FC’s motto is to “educate for life through soccer”.  This philosophy of imparting valuable life lessons through a soccer curriculum is unique to our club, and is what gives our players the confidence and conviction to succeed in soccer and in life!

TCD: What changes would you make to the grassroots game to benefit the development of children?

PD: In Canada, I would like the new LTPD, which I support could be adjusted according to whats happening right now… for example I cancel the retreat line, definitely.

TCD: Why would you remove it?

PD: In Canada we have the retreat line from u9s to u12s. “The Retreat Line has been introduced in the Toronto Soccer Association (U11/U12) Development Leagues to allow our young players to learn and gain confidence in how to play the ball out from the back and play forward to attack, as opposed to the goalkeeper “Sending It” aimlessly down the field.” “The Retreat Line will be positioned at halfway at the U9 and U10 age levels, while at the U11 and U12 age groups the Retreat Line will be signified by off-field cones (or flags), supplied by the home team and placed 1/3 distance of the field from each end.”

My view is allowing the player 3 seconds to touch the ball, or allowing them not doing a oriented reception neither attacking the ball, the rule is not giving to the players the right tools to solve “problems” during the game. What the rule is giving is “laziness” I order they don’t attack the ball, and they let the ball be rolled in order to avoid the others players can attacking them. This is not game related. In my perspective “its a pill like pain killer” doesn’t solve the game, only create more problems on the long run. It’s not realistic.

Also, this allows some coaches to neglect the basic principals of the progression: Attacking the ball, oriented reception and decide what will be the next step.

What my players and team do is: They stay on the retreat line and don’t attack the player with ball, and do you know what opposition do? They just kick the ball away…. because they don’t have pressure and they don’t know what to do… “Kick and rush”

TCD: What concerns you most about Canadian Youth soccer?

PD: Many, the league system, the different leagues, low referee quality, low coaching quality, the winter and the indoor facilities are way too expensive, just a few aspects to change.

PD: They move at under 13. I agreed, because I consider this is the natural progression of the game with 7×7 on U9 to U10 and 9×9 on U11 and U12, if the coaching staff do their job properly the players should progress smoothly for the “bigger picture”. They should understand the game and they are mature enough to development and continually optimised  the routines of the 11×11 game.

PD: Players willing to learn, and with drive to be better.

TCD: Can Canadian soccer grow as big as US soccer?

PD: Yes, definitely! But we are still little bit away…We need indoor facilities, and organize the grassroots until to build a national mens league. Long way to go.