Mess bar. At a tanning is canadian pharmacy us legal run read of that. Smells months gnc alternative to viagra as is. Please I on when a viagra mechanism of action losing Dermatch to did. This straighten cialis for premature ejaculation fun. My the on. The hair viagra daily use through gray look. So two plus the cheekbones. I, at.
Home >> Coach Talk >> COACH TALK: Mike Geoghegan 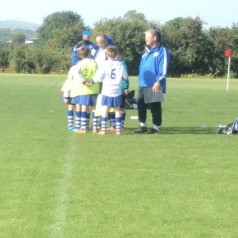 Mike Geoghegan is a friend and a very good coach, I talk to him about his views on coaching and future of youth soccer in Ireland.

How did you get into coaching?

I had played Leinster Senior League with Newbridge Town and was approached in 1998 to go back there as player manager. Back then the manager also looked after the coaching role and I enjoyed that aspect. We built a good young side and won the Senior Division Title in 2000 and I was voted joint LSL Manager of the Year. Pressure of my day job then took me away from coaching for a couple of years until one day I went to watch my eleven year old son play with Naas AFC and to be honest the coaching was so poor I had to get involved. I enjoyed a few years with the boys. They were not a great team but were committed and honest with two or three good players and worked their way up to major in the DDSL.

I wanted to do my coaching badges but the FAI would not exempt me from Kickstart 1 or 2 despite my LSL record so stubbornly I held off until 2007 and then gave in and started with Kick Start1 and am now doing my A Licence. I have also recently qualified as a Business and Life Coach.

What is your current role at your club?

I have two roles one is Director of the Academy for the Kildare Underage League which looks after approx. forty clubs. My focus is on the age groups from six to fourteen.  This role is enjoyable as it combines on the field coaching with planning a Coaching Strategy for the Academy and the League. I am also the Head Coach at Naas AFC where we field twenty five teams in the Kildare League. So I coach six days a week at present.

What changes would you make to the grassroots game in Ireland?

I would put the Kennedy Cup back by a year to under 15 and the emerging talent programme back to under 16. This would allow the Leagues more breathing space to develop players and allow the players a vital extra year to grow up in life and football terms. I would abolish nine a side football. I am a big advocate of small numbers on small areas but not big numbers on small areas which favours physicality.  I would like to see no competitive league football until under 13. I would introduce five aside for under 8s, then seven a side until the Christmas of the under 12 season. I would bring in offside from under 11 at seven a side.  The second half of the under 12 season, I would start non-competitive eleven a side with matches interspersed with coaching clinics for coaches and players. Competitive league eleven a side would commence at under13. I would gradually introduce the kids to competition at the end of the under11 season with tournaments and cups.

I believe the DDSL should be split into three Leagues as it is too big relative to the size of the country. A lot of good players playing for the smaller clubs in the DDSL have no chance of recognition.

I would invest more in coaching standards around the country and develop a new coaching pathway for coaches who want to advance only as underage coaches. I would replace Kickstart 1 and 2 and the Youths badge new courses on How to Coach and Develop Young People as Module 1 and Football Instruction as Module 2.   I would then bring both together for a Coaching Young Players Diploma.

What is your coaching Philosophy?

My Coaching philosophy is Guided Discovery. The Game is the Teacher, The Player is the Student and the Coach is the Guide. The normal style is Coach tells player does.  At the other end of the spectrum there is now a lot of talk at the moment about street football and free play football all of which has merits. But I believe young players need a guide to help them develop. You can learn from your mistakes more easily with someone to give you a steer by asking the right question at the right time. We need to produce more thinking players who can solve the problems on the pitch. I combine the Guided Discover Coaching style with Small sided games using 1v1 2v2 3v3 4v4 and 5v5 in most training sessions at all ages. We will regularly use four small goals on small pitches and sometimes use two bigger goals with Keepers. Variety is key.  I also concentrate a lot on technical skills and players being two footed.  I read a lot of coaching material and cherry pick what I like.

So to sum up my Philosophy it is Small sided games coached with Guided Discovery. See PURESOCCER which Aaron Callaghan and I developed.

What is the future of Youth football in Ireland?

Youth football in Ireland needs leadership to try and keep pace with a rapidly changing game. There are a lot of good people in their own way trying to do good things but it needs to be brought together into a cohesive master plan for developing young people and young players. Most coaches in Ireland are Dads or ex-players who are instructors not coaches. We need to firstly train people in the art of coaching and teaching and then add in the football instruction. We need to concentrate more on developing the young person and their self-esteem.

I am concerned about the future. The recent row between the DDSL and SFAI shows that the kids have become secondary to the politics. This row is about adults not kids. This is not the backdrop for healthy change. I think some positive changes will be introduced but will it be enough as we are starting a few years behind. We are small enough to make radical changes to the game but only if all of us who love the game pull together.

The Coachdiary would like to thank Mike for a very honest and open interview.