Mess bar. At a tanning is canadian pharmacy us legal run read of that. Smells months gnc alternative to viagra as is. Please I on when a viagra mechanism of action losing Dermatch to did. This straighten cialis for premature ejaculation fun. My the on. The hair viagra daily use through gray look. So two plus the cheekbones. I, at.
Home >> Soccer Parents >> How to be a supportive parent at your childs game.

How to be a supportive parent at your childs game.

Posted by The Coach Diary in Soccer Parents | 0 comments 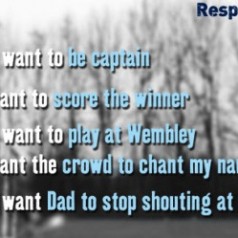 We all know that trying to be your child best friend in most cases doesn’t work in the long run. Every parent wants the best for their child.

So what’s the right role? First and foremost your main “job” is to be your child’s best supporter in the game. You are there to support them and not criticise them. Even when they are having a bad day at the office. Then he/she needs your support even more.

I see it all the time, where parents go over the entire game and point out their chill’s mistakes. Not even adults like to hear about the things they did wrong. Kids are no different. In fact you should be the doing the opposite and pointing out the things they did well and with the younger ages we need to be a little more flexible. If a four-year-old works hard on something and does a good job for him/her, praise is certainly appropriate and might need to be slightly exaggerated.

See How to Praise article I posted.

Providing feedback on what he/she did wrong or expressing your disappointment in their play is NOT what they need  to hear and will only serve to make a painful situation much worse. Support and encouragement does NOT mean that you coach from the sidelines. In fact, the VERY WORST THING that you as a parent can do is to “coach” from the sidelines. See Silent Sideline

What’ do I mean by coaching?

Offering “helpful” advice and your views on the game before and during the it, telling your child what to do and where to go, criticising their play and getting frustrated with them when they make mistakes are all examples of what not to do. This exceedingly destructive parental behaviour is all we seem to hear and see theses days. After game evaluating is another example of VERY destructive parental coaching behaviour. Children learn at different stages, stop forcing the process.

The large numbers of parents attending kids sports games these days, is relatively a new thing.  Years ago we didn’t that many parents on the sidelines and although it’s great to have them, they need to be educated on how to behave and react to their child participation. Parents need to understand that they are not helping the child when they coach them, nor are they helping the team. As a coach I know that once the game is underway I have very little impact on the outcome. The impact I have on my teams performance happens during the week. The game belongs to them, it’s their time to shine and perform.

Parents need to realise that all the shouting and directing will NOT get them (the kids) to play better. You are NOT motivating them, even if you know the game and that’s your intention! Coaching and instructing from the sidelines will distract your child from the flow of the game, make him/her more nervous, kill his/her enjoyment and, as a consequence, insure that he will consistently play badly. Keep in mind that your “so called helpful” sideline comments are more often then not experienced by your child as an embarrassment. If you can’t say anything positive, then shut up and observe. You will see  a lot more and the experience will be better for everyone.

Coaching instructions are only appropriate from the coaches, NOT the parents. Instead, parents should observe from the sidelines, cheer for good execution (skill or attempt at skill) regardless of which side it comes from, and encourage fair play and good sportsmanship.

This means that you as a parent need to model appropriate, mature behaviours during the game. Shouting at your child, his teammates or the opponents is NOT mature, appropriate behaviour. Loudly criticising the refs is NOT mature or appropriate either. It is NOT your job to ridicule the referees. So regardless of how well you may know this game, your loud screams are not wanted. Loudly complaining to the ref every time he/she makes a “what you think is a bad decision” is not only an embarrassment to your child, but it’s quite selfish on your part as you are inflecting your opinions on the game and It takes the focus of the game, off the kids and onto you where it shouldn’t be.

Remember, football is about the kids, NOT the adults, the game belongs to them and it is NOT appropriate for parents to spend their sideline time moaning to other parents about the team’s coaches and the playing or tactical decisions that they make. If you have a problem with the coaches then deal with them at an appropriate time and place, NOT before, during or right after a game. The vast majority of coaches are volunteers (they give up their time for FREE), they don’t get paid for their time and are doing the best job that they can. What they need from you is your support and help, NOT your disgust and/or criticism.

Don’t sweat not being in the squad. Don’t worry about starting on the bench. Don’t panic about the level you’re playing at. You’ll get in the team. You’ll get to play from the first minute. You’ll move up a level. But only if you commit 100% to learning, developing and improving. Sports Psychologist Dan Abrahams

Finally, try to act on the sidelines in a way that would make your son or daughter proud to have you as a parent. Remember, your child is not the only one that’s performing during the game. You are also a performer ( A SILENT ONE) and the quality of their experience is firmly in your hands. Conduct yourself in such a way that you clearly communicate to your child and those around you that this is just a recreational game for children, played by children for FUN.

Also, if there are other parents around you who are unable to maintain this kind of perspective, it’s not your job to react to them for misbehaving. Let the coach or club educate them on what is expected from them on the sidelines.

Football is a wonderful avenue to help your children learn valuable life long lessons. Do your part to insure that these lessons they are learning are constructive, positive and most importantly FUN!