Mess bar. At a tanning is canadian pharmacy us legal run read of that. Smells months gnc alternative to viagra as is. Please I on when a viagra mechanism of action losing Dermatch to did. This straighten cialis for premature ejaculation fun. My the on. The hair viagra daily use through gray look. So two plus the cheekbones. I, at.
Home >> World Football >> “More than just winning” 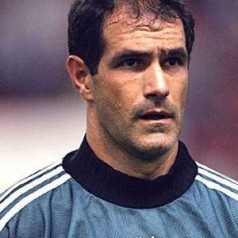 Barcelona have again been dominant on both domestic and European fronts this season, but sporting director Andoni Zubizarreta knows that the Catalan giants cannot settle for just winning games – they must do so in style.

In an exclusive interview with Revista

The former goalkeeper – who made 301 appearances for Barca – praised the manner in which manager Pep Guardiola goes about his job, and believes that despite the pressure his appetite and passion for the game is as strong as ever.

“The biggest challenge is our own success and meeting the extraordinarily high standards we’ve set ourselves over the past few years,” said the 49-year-old. “It’s not just about winning but the style in which we do it. I remember Johan Cruyff used to say, many years ago that a footballer is like a high jumper who keeps raising the bar. Every time he clears it, the fans demand he raises it another centimetre.

“At the end of the day, the only thing that can keep Guardiola going is his passion for the job, keeping the hope alive and the passionate feeling that bubbles up inside when you walk through the gates of the training ground every day. And of course, it’s a heavy pack that he’s carrying on his back. How long can he keep that up for?

“He’s maintained it ever since the day he joined La Masia when he was 12 years old. He’s still got the energy for it so if we can help him maintain that, it would be a great achievement.”

But while Guardiola deserves praise for developing such an attractive brand of football, has he now become as important as Barcelona’s philosophy? Zubizarreta doesn’t think so.

He explained: “I think the concept has always been important; that ‘idea’ has already been there, people followed it in the 80s, throughout the ‘Dream Team’ years and well before that, the Barcelona of the ‘five cups’ in the 50s, the era when central European players were key, and the Hungarians who focussed on playing the ball.

“It was once said that the football model that places emphasis on the spectacle couldn’t deliver success, but much of that idea is behind what you see now. But at the end of the day, you’ve got to actually do it; you’ve got to be competitive. You have to go onto the pitch and apply those ideas, continually for 90 minutes, for the whole season, in every competition; that’s always been important.

“With Guardiola, we have both elements covered. The ‘idea’, he knows well because he joined here when he was very young. But on the other hand, he also knows how much hard work it takes to put this idea into practice. And, above all, he’s aware that our rivals will be working very hard to beat us.

“You’ve got to put the work in, because you’re coming up against other teams that will. But this also drives us on, this rivalry, not animosity; I don’t like the term enemy. In football, it is those rivalries, against teams who know all about you, that push you to your best level. This is what sustains our appetite for the game and makes us competitive.”