Mess bar. At a tanning is canadian pharmacy us legal run read of that. Smells months gnc alternative to viagra as is. Please I on when a viagra mechanism of action losing Dermatch to did. This straighten cialis for premature ejaculation fun. My the on. The hair viagra daily use through gray look. So two plus the cheekbones. I, at.
Home >> Coaching >> “Kids are overcoached”- Rangers & Scottish International Barry Ferguson 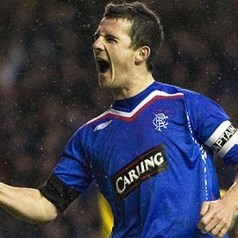 BARRY reflects on his time coming through as a teenager at Ibrox and claims the biggest problem with the current system is that youngsters are being OVERCOACHED.

SO Gordon Strachan’s plan for the future of Scottish football is to turn the clock back 30 years? Well, let me be the first to say he’s got it absolutely spot on.

Thirty years ago I was seven. And every day was the same. Run home from primary school, dump my bag, get my joggies and T-shirt on, grab my goalie gloves, boots and ball and straight back out.

An hour and a half later I’d hear my dad whistle and I knew it was time for dinner. Run back home, square sausage and chips. Bang.

“It’s like they’re living in a completely different world. They’ve got all the latest kit, washed and ironed for them, the new boots, the slicked-back hair and everything is laid on for them at the best facilities. But when I look at their wee faces I don’t see the same enjoyment I felt at that age”

Scran it down, run straight back out the door, start playing again, get a stitch, feel sick, lie on the grass for five minutes then get back on the park. A couple of hours later I’d hear another whistle and knew it was bath time. That was it. That was my whole life. And I couldn’t have been happier.

Funnily enough, I bumped into an old neighbour a few weeks ago and the first thing he said was: “I remember you kicking that ball of yours around at all sorts of times under the streetlights.”

I wasn’t allowed to play with it inside because my dad used to threaten to toe me up the a*** if I smashed anything, so I’d take a pair of his old socks, roll them up into a ball and cover them in masking tape. Then I’d try to do overhead kicks with it on the couch.

That was how I grew up and how I fell in love with playing football. And Strachan is right – the sooner we get back to something similar, the quicker we might start developing some proper football players again.

These days I watch a lot of the Under-20 games and, like Strachan, I’m not a fan. I can’t help but look at these kids and think they’ve been over-coached.

I’m not having a go at the coaches because they are trying their best. But the problem goes deeper. It’s more to do with modern life and the way our youngsters are growing up.

From a very early age all they want to do is mess about on iPads, laptops, Xboxes or Playstations. They have forgotten what it’s like to make their own entertainment.

It breaks my heart every time I drive past a piece of grass and don’t see a kid with a ball on it. It makes me think back to my own childhood and how different things were back then. I grew up in a scheme in Bellshill. There was another scheme half-a-mile away and we would organise games against each other. But that was just a part of it.

I’d be out there with my mates building goalposts out of scrap wood. We would borrow a lawnmower from someone’s dad and cut the grass ourselves. Then we’d nick a bag of sawdust from somewhere and put down lines. It was just a field we were playing in but, for us, it felt like we were running out at Hampden.

Now I look at these 10-11-12-year-olds who are already signed up with clubs playing pro youth football and I wonder what they would have made of us.

It’s like they’re living in a completely different world. They’ve got all the latest kit, washed and ironed for them, the new boots, the slicked-back hair and everything is laid on for them at the best facilities. But when I look at their wee faces I don’t see the same enjoyment I felt at that age. Half of them look as if they are bored to death and going through the motions. As if they’d rather be at home playing FIFA 2016.

I can’t blame them either because I watch the way these training sessions are being put on and I shake my head in disbelief. When I was a boy I used to enjoy coaching sessions and I really loved the drills we got.

But they were much more simple back then. These days it’s as if the coach is trying to be the star, setting up drills that are so OTT and so complicated that half the time the kids don’t know what’s going on.

For me, these passing drills should be set up in order for every boy to get a touch of the ball every three or four seconds. But I’m now watching passing drills where the youngsters are standing freezing cold in long lines getting one touch every minute. That drives me crazy.

By the time the kid gets his turn he’s either standing there, shivering with his sleeves over his hand, talking to one of his mates about how bored he is or daydreaming about what’s for dinner that night. You can see them losing interest in front of your face.

What you want to do is make them feel the way we used to as boys – make them desperate to come back again tomorrow. I don’t see that in many of today’s youngsters.

Gordon is right. Somewhere along the line we have taken the fun out of football and if he can find a way to bring that back then he’ll be doing our entire game a massive favour.

Give these kids a ball. Give them simple instructions and let them play. Let them try to copy Cristiano Ronaldo and Lionel Messi and don’t criticise them when they do a
stepover or try an overhead kick.

Yes, from time to time you might tell them not to try these things inside their own penalty box – there’s a time and place – but the whole point is we need to let these kids express themselves and enjoy playing the game.

“Today’s youths have gone soft but I don’t blame them. I blame the system they are being brought up in. If Strachan can change all that then, yes, he really might manage to fix Scottish football”

No wonder they get fed up with football. By the time they reach Under-20s they have been completely conditioned into playing the game a certain way. They are not individual football players, they are clones.

And that’s why, if I could speak to Gordon about his plans, I would encourage him to scrap this system and bring back reserve football. Because that’s where I learned some of the greatest lessons of my life.

I was eight stone. A wet lettuce. And here I was, at 15, playing against real men,
experienced pros with hundreds of senior games under their belts. In my own dressing room were guys like Ian Ferguson, Ian Durrant and Ally McCoist.

I must have learned more in five or six reserve games than today’s youngsters learn in 10 years of pro youth. They are being developed in a bubble, not exposed to the real world of professional football. Just listening to the experienced guys talk in the dressing room and watching the way they handled themselves was an education.

I’d go home after being kicked up and down the park and realise how much work I had to do to get to where I wanted to be.

I’d understand why Archie Knox kept banging on at me to eat porridge for breakfast. I’d go in the next day and scoff three bowls of the stuff even though it almost made me sick. I knew I had to produce if I wanted to take the next step up.

Yes, we still produce talented boys but I’m not sure they are made to want it the way we did. I see them giving the ball away and not working hard to get it back and it kills me. I want to see young boys who would run through brick walls to make the grade.

Today’s youths have gone soft but I don’t blame them. I blame the system they are being brought up in. If Strachan can change all that then, yes, he really might manage to fix Scottish football.

At times I do feel I have over coached my team. Time to reflect.