Mess bar. At a tanning is canadian pharmacy us legal run read of that. Smells months gnc alternative to viagra as is. Please I on when a viagra mechanism of action losing Dermatch to did. This straighten cialis for premature ejaculation fun. My the on. The hair viagra daily use through gray look. So two plus the cheekbones. I, at.
Home >> Irish Grassroots Football >> Support Dont X the Line 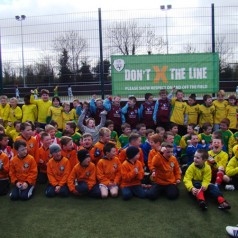 I met with Paul Martyn (FAI Volunteer Education Co-Ordinator) and asked him about DXTL?

Paul explained, “It is the underage players we are trying to target with the campaign. The Don’t X the Line campaign is trying to encourage the players to enjoy the game and not worry about winning matches”. He added. “The programme is not only aimed at the players but spectators, parents, coaches and managers to behave while attending games.

We aim to nourish and encourage the fun and enthusiasm our young players bring to the game.”

The DXTL has been running since 2009 now and the FAI have now asked all clubs to get on board and support the campaign.

The five aims of the campaign are:

It is hoped the campaign will take off and other leagues around the country will adopt it. Already leagues in Monaghan, Cavan, North Dublin and Kerry are implementing it. Only last week Arklow United got on board and Paul mentioned he doesn’t just ask coaches to attend the talk put to bring all the kids, parents and anyone involved with the club and to his astonishment over 300 coaches, kids and parents attended. Click on link –  Arklow United

Paul travels around Ireland implementing and spreading the word about DXTL, he runs workshops for clubs and for teams interested in getting involved.

NECSL launched the Don’t X The Line campaign in the Meath & District League grounds in Navan. The Under 7 league runs for twenty four weeks under the guidance of Mags Sheridan from the NECSL.

Mags is the driving force behind the league and indeed it’s smoothness of running is down to her supreme organisational skills.

28 Teams playing Every Saturday in one venue

There are twenty eight teams playing every Saturday morning on the all weather facility in Navan. All teams play two games each and the emphasis is on FUN. There is a match card that each Manager fills out after each game but the one thing not on the card is the score of the game. Mags says “We are trying to keep it non competitive and fun for the young players”. Paul stresses it is the underage players we are trying to target the campaign at, we need to get them young for this to work.

Mal Lee was the creator of DXTL in Liverpool back in 2004, Mal, says,

“I was involved in grassroots football for well over 20 years; throughout those years I have witnessed first hand aggression, verbal abuse, racist comments, bullying, and now the smoking of illegal drugs on the touchlines of some Junior Leagues”.

” Not just on Merseyside, but leagues throughout the Country, I have witnessed children crying because their parents are involved in fighting with the opponent parents, referees abandoning games and walking away from them, never to return to the game because of threats and abusive comments directed at them”.

Committee members have stepped down due to aggressive parents, and sometimes managers. Campaigns like Don’t X The Line must be continued to be supported by the decent people who support the sport for all the right reasons.

“Together we must protect our children and referees, and bring the sportsmanship and fair play back into grassroots football”.

If you or your clubs want more information on the DXTL campaign you can email Paul Martyn at paul.martyn@fai.ie. The DXTL packs are also available for sale through Paul, this packs are subsidised by the FAI.

From next Wednesday Paul will be travelling around Ireland with the Europa league trophy, for more information on this go to the FAI website.