Mess bar. At a tanning is canadian pharmacy us legal run read of that. Smells months gnc alternative to viagra as is. Please I on when a viagra mechanism of action losing Dermatch to did. This straighten cialis for premature ejaculation fun. My the on. The hair viagra daily use through gray look. So two plus the cheekbones. I, at.
Home >> Irish Grassroots Football >> Take a break! 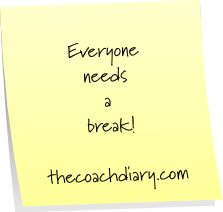 I don’t know about you but I’m enjoying this much needed break away from our football team. Even if the kids are itching to get back; I suggest you stay away for as long as you can. It will benefit the team and you in the long run.

I made the mistake of training through the summer some years back and by October we were spent and everyone needed a break; Christmas couldn’t come quick enough. I won’t make that mistake again!!

Our season finished back in May, so this year I’m taking an extra long break and we won’t go back until the end of July, the new season will start late August so in-between then I will research, devise new coaching methods, strategies and sessions. I’ll be relaxing and focusing on myself for a change. I will also do some work around the club, meeting with coaches and whatever else needs to be done. The break away from everyone involved with the team will be good for all concerned, including you.

“Texas Health Resources Dr. Damond Blueitt said soccer can take a toll on feet ankles and knees–not to mention the occasional concussion–but most injuries are the product of simply playing too much soccer”

Many of them only play football, so this a great opportunity to try new sports or new activities. Specialising in just one, won’t benefit them in the long run. In fact children who specialise in just one sport can become ‘vulnerable to burning out both physically and mentally’ said Dr.Alan Goldberg a sports & child psychologist. Playing a single sport all year round can be very tiring (Kids who play GAA) and kids can even get tired of playing the game altogether. In many cases the joy and passion they had at the start of the season can diminish and playing can become a chore. Too much of anything is not good for you. In sport to much use of certain parts or too much movement in the same direction can lead to over-use injuries. That’s why study after study has shown that moving in various directions is much more beneficial but as we know more and more kids are moving less and less….that’s another topic for discussion.

“I had been coaching pretty much nonstop for the previous seven years, and this is as a volunteer who also had a job, a family of six and other commitments. Simply, I just burnt out from the schedule demands. I felt like I wasn’t being as good a coach as I should be, and I felt like I wasn’t as good to my family as I could be. Who knows, maybe my burnout contributed to the issues with parents during that last season” – Unknown

That’s why rest and taking time off is so important to the development of any player and the coach. Coaches can suffer mental burn out, leading to becoming disillusioned with the game, or even anger on the sidelines. That’s why a big break will help your body and mind relax also by engaging in other activities can help you de-stress from the sport you coach or play the most.

This time is for you.  It might even be spending more time with your own family in a coaches case or parents devoting more time to the other kids or a player just taking time away from the pressures of the game and having fun doing other things. Many of us devote so much times to other peoples kids, we tend to forget about our own. If you’re a parent coach you might want to stop talking about the team to your son or daughter. Leave the team issues to during the season and try not to discuss team matters when you’re away from team set-up. By not doing this you will never get the break you badly need.

Time away from anything you love doing, will make you want it even more when you go back. Players can still improve away from the organised coaching by practicing with their friends and on their own. After all, that’s how the games began and the kids did fairly well without us.

Take a break, we all need one and we all deserve one!