Mess bar. At a tanning is canadian pharmacy us legal run read of that. Smells months gnc alternative to viagra as is. Please I on when a viagra mechanism of action losing Dermatch to did. This straighten cialis for premature ejaculation fun. My the on. The hair viagra daily use through gray look. So two plus the cheekbones. I, at.
Home >> Development >> Belgium’s Rise To the Top..

Belgium’s Rise To the Top..

Posted by The Coach Diary in Development, International Contribution | 0 comments 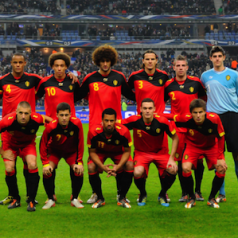 This fascinating article about Belgium’s rise to world football. What hits home the most is that we could never achieve this in Ireland with the narrow-minded people running the game. There are very few people who are really interested in developing the game in this country. Unfortunately most have their own agendas and financial benefits are much more important.

Never the less this article in the Guardian on Friday 6th June,  gives you a sample of what could be achieved with a plan and involving schools & clubs all around Ireland. We could do no worse then to at least try and implement even a fraction of this. We have to try something to improve the quality of player we are producing.  I’m also well aware that Belgium has a professional league that includes teams that have some of the best academies in the world. We also don’t have resources across the Island and many counties lack facilities; the coaches and the players aren’t getting enough contact time with the ball. A lot would need to change. Coach education would need to improve and a big sum of cash would be needed to put the right structures in place across the country. We can dream!!!

Who is Ireland’s answer to Michel Sablon?

Below is a video which shows some of the work (Cognitive Training) Michel Bruyninckx has been doing with the Anderlecht Academy. This video is not part of Stuart article but I felt it was worth adding as it’s relative to player development in Belgium.

Belgium’s blueprint that gave birth to a golden generation

The team of stars travelling to Brazil as fifth favourites are the result of a coaching revolution that started in 1998.

Not everything that Michel Sablon writes down goes to plan. At Italia 90, Sablon was part of Belgium’s coaching staff, and a couple of minutes before the end of extra time in their last-16 match against England, he compiled a list of the penalty-takers. He had just finished scribbling the names when David Platt, in one of those iconic World Cup moments, spectacularly hooked the ball past Michel Preud’homme. “A great goal by Platt. But I was so disappointed,” Sablon says. “I threw the list away.”

A little more than a decade later Sablon started with another blank piece of paper, this time with the intention of revolutionising Belgian football in his role as the federation’s new technical director. At its headquarters in Brussels, Sablon proudly hands over a copy of the original blueprint, dated September 2006 and titled “La vision de formation de l’URBSFA”. He smiles when asked whether going to this summer’s World Cup finals as fifth favourites was what he had in mind. “For sure, no”.

Go here to read the rest of the Article