Mess bar. At a tanning is canadian pharmacy us legal run read of that. Smells months gnc alternative to viagra as is. Please I on when a viagra mechanism of action losing Dermatch to did. This straighten cialis for premature ejaculation fun. My the on. The hair viagra daily use through gray look. So two plus the cheekbones. I, at.
Home >> Irish Grassroots Football >> Embrace the mistakes and use them as a guide to improve

Embrace the mistakes and use them as a guide to improve 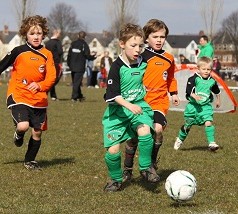 One of the most difficult problem we have as adults is to learn to recognise children make mistakes and including during games. That’s how children learn how to play the game and they will continue to make mistakes  – lots of them. If you can’t deal with children making mistakes, then you shouldn’t be coaching.

Let the game be the teacher

Too many adults act on their tendencies to want to point out and to correct every mistake a child makes during a game but fail to realise that the game is the time to make mistakes and training is the time to rectify that. All you are doing is intimidating the developing player and stopping  him/her from taking risks, making a decision for themselves, being creative and to often they end of playing a game that is more about the coach and less about them.

In every other walk of life you would probably be arrested for this sort of abuse and told to stay away from children for life, yet we allow this to happen every single week out in the open in front of players, parents and even the men/women who control the game the referees; yet know one ever stops a game to arrest an abusive coach.

As a coach it is up to you to get the training started, be organised and make it age appropriate and fun. When you come to the game again at the youngest ages it should be “Make a lot of mistakes because that’s how you’ll learn” Let the game be the coach and the coach be the mentor. Too often coaches are concentrating on what the book says (or how they were coached) and it is important for underscoring the dramatic differences between what a book suggests and what the reality is today for many kids in soccer.

I think we have now come to over coaching the kids at the youngest ages, I see coaches trying to play a Barcelona style game at u7s and u8s and already judging kids ability and athletic potential. Only the other day I heard of coaches telling 8 year olds they weren’t good enough to play football. Is this what the game has come too, not allowing kids to play and be active, taking away their dreams and confidence even before they can barely kick a ball. No one has the right to tell any child he/she can’t play soccer; a recreational game played all over the world by boys and girls of all ages. The game belongs to them not us.

We as adults need to step back and put down the remote. Let the children, no matter how old, take charge of some of there game. in practice, let them come up with some of the games strategies, let them figure out who should play which positions and never, ever, allow things to get so serious that it stops being FUN!.