Mess bar. At a tanning is canadian pharmacy us legal run read of that. Smells months gnc alternative to viagra as is. Please I on when a viagra mechanism of action losing Dermatch to did. This straighten cialis for premature ejaculation fun. My the on. The hair viagra daily use through gray look. So two plus the cheekbones. I, at.
Home >> Irish Grassroots Football >> English FA plans will help the kids REACH the crossbar

English FA plans will help the kids REACH the crossbar 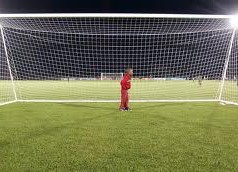 ‘When the adults come to take the nets down, they use a step ladder,’ he said. ‘How am I expected to save shots in a goal that big?’

Question like these will be a thing of the past come 2013, (wow, that’s ages away…do it now) well in the UK anyhow. That is when changes to grass roots football will be implemented by the Football Association, fundamentally changing the development of young players and altering everything about the way the game is played: from the goal, the pitch sizes to the team numbers and even league formats and age calculations. So for that young boys questions of a tiny goalkeeper standing alone in acres of sodden pitch, protecting an area designed to test men twice his size and unable to stop any ball that goes over his fingers – will be a thing of the past.  Kids will play in games and pitches appropriate to their age and size.

The Football Association’s head of elite development, spoke recently and said “this will be taken this around the UK to convince sceptics during a consultation process which ends in September. It will then be put before the annual meetings of county associations next May, with the next 14 months used to prepare before its permanent introduction at the start of the 2013-14 season”. Although the the FA hope many leagues will pre-empt this date by changing their formats this year.

Bringing England in line with Spain, Portugal, Holland and Germany and within a year of France and Italy, we in Ireland could do we adopting what our neighbours are doing for the good of the kids and their development. I mentioned before how Scotland and Wales had already taken a leap and made drastic changes to their GR game. As per usual we are last to implement change and no point in 1 league in Dublin and some outside the doing it. This needs to be brought in across Ireland and if teams can’t field players for 9v9s or 11v11 then they continue with the 7v7 for longer. Everything that can be done must be done to make games fair and age appropriate. Making sure that these changes are all about the kids that PLAY and NOT the ADULTS.

(Size of the ball needs to be changes also)

Southgate expressed how “More goals, touches and improved skill should be the result of all these changes. In the UK Goals and pitches will be of appropriate size, and markings will be displayed inside existing pitches in different colours (great idea), following the design of an indoor sports hall in which various games co-exist”.

‘People have seen the way that the likes of Barcelona have played this year and they’re asking: ‘Why can’t our kids play that way? ”We want them to play that way. We feel that what we are proposing will give them the environment to develop those skills.

‘We have down the years produced some technically gifted players but we want to increase that pool of talent so that if our best one or two players get injured, there is a bigger talent pool to come in.’

The research involved in the project showed that children who are slow to physically mature are also being forced out of the game before they have a chance to have a crack at professional level.

‘It benefits the physically stronger players but there’s a real danger that we lose the smaller, more technically gifted ones.

Southgate thinks the idea of introducing smaller teams and smaller pitches will help to encourage a player the size of Lionel Messi come through the English system, rather than be bullied out of it. ‘In 11-a-side matches there are fewer touches for players,’ the former Middlesbrough manager said.

‘If we go to that format too young then it becomes much more of an athletic-based game. We have huge pitches that kids can’t get around. ‘It benefits the physically stronger players but there’s a real danger that we lose the smaller, more technically gifted ones. ‘There is a high drop-out of players in that nature.’

Similar to what the NDSL have proposed

There will be no leagues in professional academies until the under-18 age group, but grass roots clubs will be allowed to publish tables from under-12. Before that, clubs will play friendlies between league members, with November, and perhaps February and May set aside as competition months organised in various forms.

Quote “We are not looking to make football non-competitive, the league will still keep a record of the results to gauge the strengths of teams, but there is nothing less competitive than being stuck in a league that is too good for you or too weak.

‘This way, teams are constantly assessed and can be paired against opponents of appropriate strength. A team who would have no chance of winning might suddenly win a competition, a team who have been winning easily will be tested.

‘Not having official tables doesn’t mean you don’t have competition. There is a league in the North West that spends £20,000 a year on trophies and medals. One club spent £6,000 on end-of-season prizes.’ The point is, kids think differently about football. Adults value medals and let a bad result spoil the weekend; children like the game and quickly get over an adverse result unless pressured to think differently.

said “there were 44 groups of children aged eight to 12 interviewed by the FA and the results were intriguing. They tend to know their year of birth rather than the more complex branding of under-nine or under-10. So, from 2013, club football will run in years, as in hockey. Your kid will play for Ramshackle Rovers 2000 or 2001, the oldest boy born January 1 and the youngest December 31. (I’m thinking, why wait do it now!)

(This will come into affect this year for us) In fact most of these ideas are not to similar to what Tony Gains and the NDSL are implementing this coming season.

The goalkeeper, Robert, (the boy behind that great quote) who was the catalyst for so much of this debate, had one year trying to defend the same size goal as Petr Cech and quit. He plays only school football now.

The challenge of convincing the English associations rests with Levett, who needs 75 per cent approval by next May.

Quote ‘I’m not saying don’t play 11 against 11 on a full-size pitch,’ he said. ‘I’m just saying, if you wish to, please show us the evidence that this is for the best: because we can’t find any”.

With the SFAI AGM meeting on this Saturday in Sligo, it will be interesting to see what comes of it and what great ideas the MEN not kids that manage kids football come up with this year. (Unfortunately I can’t make it down as I’m helping to run a charity event for Dyspraxia Ireland)

This post will be going straight to Mr Michael O’Brien, Chairman of the SFAI and The South Dublin Football League. inbox. It would please me even more if he Subscribed to my site.

Click on the link to see who else is on the SFAI Council http://www.sfai.ie/sfai_council.htm what I’d love to know is how many of these members are Grassroots Coaches, FAI Coaches, Teachers, Child Psychologists, Youth Development Officers, Parents of children who left the game because it wasn’t fun anymore, what about someone that actually speaks on behalf of the kids that PLAY, after all this is why we organise this game in the first place!

Personally I would like to see the FAI stepping in at this stage and revamping the entire structure of grassroots soccer in Ireland. The time is now!!! Many coaches, parents, managers have been wanting changes for many years and we are just that little to slow to react.

“To get something done a committee should consist of three men, two of whom are absent“.