Mess bar. At a tanning is canadian pharmacy us legal run read of that. Smells months gnc alternative to viagra as is. Please I on when a viagra mechanism of action losing Dermatch to did. This straighten cialis for premature ejaculation fun. My the on. The hair viagra daily use through gray look. So two plus the cheekbones. I, at.
Home >> Futsal >> Futsal for all, with the NDSL!

Futsal for all, with the NDSL! 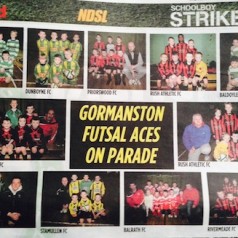 Gormanston was packed last weekend for Futsal fever. Hard to believe, but it has actually been running for 6 years now in conjunction with the FAI, NDSL and Fingal Sports Department. With over 50 teams from 35 clubs participating this is the biggest Futsal Festival in the Country. Last weekend was week 3 of 6, running from 10am to 4pm, which is fantastic for the 6 weeks and the kids involved but why we aren’t’ rolling out futsal fixtures for the entire year??!!

A few weeks back Paul Keogh from the FAI, put on an introduction to Futsal for all coaches, ensuring they were aware of the rules and the importance of focusing on learning and improving within the game. A new rule brought in this year for teams who were losing by more than 3 goals is to introduce an extra man to bring the score back to two before the teams would return to a 5v5 game. A rule that is being considered by the NDSL for games played on grass.

Futsal is the game that likes of Xavi, Iniesta, C.Ronaldo, Figo, Messi, Coutinho, Naymar to name some started with, before they moved to outdoor football. I grew up with Futsal, so I know the benefits and to be honest it’s not hard to see.

Kudos to the NDSL, Fingal Sports Dept, Paul Keogh and the team for continuing with the module, when many leagues around the country don’t give it a look-in. If we are serious about improving kids technique and game intelligence then Futsal will have to be taken more seriously and rolled out across the country in schools and clubs.