Mess bar. At a tanning is canadian pharmacy us legal run read of that. Smells months gnc alternative to viagra as is. Please I on when a viagra mechanism of action losing Dermatch to did. This straighten cialis for premature ejaculation fun. My the on. The hair viagra daily use through gray look. So two plus the cheekbones. I, at.
Home >> Coaching >> Please Don’t Quit 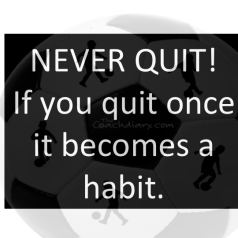 We have all heard the stories of kids quitting. Research suggests that around 70% of children are dropping out of organised sports by the age of 13 and the stats are even higher for girls.

Many other things contribute to kids leaving sport, but the number one reason is it was no longer FUN!!

Now fun can be categorised into lots of meanings. It’s still the number 1 reason they leave.

In a 2014 study for George Washington University, researcher Amanda Visik interviewed numerous athletes and asked them why they played sports, and 9 out of 10 said the 1 reason they played was it was fun…

They listed eighty-one characteristics of fun, and winning (#48), playing tournaments (#63) and practicing with private trainers (#66) did not finish high on the list.

Here is what kids wanted What kids say is most fun!

The reason for this post is that I came across and great response from a coach to a child (Chris) age 11 who wanted to quit playing football.

My dad says I can’t quit my team, but I don’t want to play football anymore. All I do is sit on the bench during the games. What should I do?

Congratulations on making the football team. Believe it or not, the first year I tried out for football I did not make the team. I remember how sad I was when the coach read off the names of the kids who would be playing that year. I tried out the next year and sat on the bench during most of the games, only playing a few plays. But I knew I would not play in the games. The other players were bigger and better than I was, so why would coach put me in?

So, instead of complaining about playing time, I decided to make practice my games. Every Tuesday and Thursday I would prepare for practice as if I was going to be playing a game. I went all out on the scout team, knowing that the harder I was to block in practice, the better my team would do in the game. When they did well in the game, I took pride in knowing I helped them prepare.

Practice was hard, Chris. I got knocked down, a lot. I was scared, but I tried not to let the other players know how scared I was. Some of the players hit really hard and the noise alone made me want to quit.

After a few weeks I got better and was less afraid. I made some friends on the team and started to have fun. I still got knocked down, and I wasn’t very good, but I realized what a privilege it was to be on the team. I promised myself I would finish the season and then decide if I wanted to play again.

Also, I thought I was letting my dad down by not starting. When I told him I was embarrassed because I sat the bench, he told me he was proud that I made the team, and that he loved to watch me go all out in practice. That helped a lot knowing that my dad just loved to watch me practice.

The next year, you know what? I was one of the best players on the team. I was voted team captain and rarely came out of the game. I am not saying this will happen for you, but I am telling you that in order to be good at something, you have to be okay with being bad at it first. Then you get better. Always aim to get better, no matter what you do in life.

I want to encourage you to finish the season. You don’t have to play next year, but you should follow through with your commitment and try to have as much fun while you are there. Please don’t quit.

the noral of the story is never quit, never give up and alsways finish something you’ve started. See it out where at all possible.