Mess bar. At a tanning is canadian pharmacy us legal run read of that. Smells months gnc alternative to viagra as is. Please I on when a viagra mechanism of action losing Dermatch to did. This straighten cialis for premature ejaculation fun. My the on. The hair viagra daily use through gray look. So two plus the cheekbones. I, at.
Home >> Irish Grassroots Football >> What’s with all the running?

What’s with all the running? 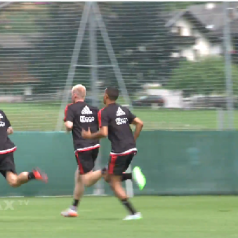 Pre-season for some reason means that you have to run the legs off the players, no matter what age. This is a blurb from Football coach Raymond Verheijen:

Pre-season incompetence: Fatiguing non-football conditioning in morning followed by football training in afternoon with already tired player. Football is a ‘speed of actions’ sport. In other words, an intensity sport. It’s about the quality of training rather than the quantity. Players should start every training session totally fresh. In other words, with maximum speed of actions. So, no fatigue from previous session. Unfortunately, football is hijacked by clueless fitness clowns & scientific cowboys fatiguing players in morning before football in afternoon.

Football coaches should understand periodisation/conditioning rather than non-football fitness coaches trying/failing to understand football. Fitness is an integral part of football. So, fitness is not something you need to play football but something you develop by playing football. By gradually increasing demands within football exercises (less space & time) players will be overloaded and eventually the body will adapt.

Raymond makes so many valid points here. As you would know from reading my blog my focus is mainly on youth sport and youth football. Over the last month (pre-season) all I have witnessed is coaches running kids all over the park. The most most significant point (in bold above). If you want to get your players fit then do exercises that involve the ball and overload their thinking also. Working the brain and feet is just as important as working the lungs.

As a result football is an intensity sport, a speed of action sport and not an endurance sport. -RV

Coaches need to ask themselves what’s the objective of the pre-season, what is your philosophy? Is it to have a team that is super fit or maybe you just want them to be very good at passing?

Why not try and achieve both?

As a coach you must set out your plan, priorities and the objective of pre-season. What’s important. The one thing you don’t need is injured players just as the season kicks off.

Raymond recently stated in an interview: “If you keep doing this from day to day, week to week in pre-season, you accumulate fatigue and as a result the nervous system becomes slower and injuries become more likely because they’re still having to make such explosive movements in football training. So the one thing we should avoid in pre-season is accumulation of fatigue and by doing that you will reduce the injury risk significantly and when you reduce injuries you train and play with your strongest XI as often as possible and as a result you have maximum development of communication and teamwork”.

You don’t need to run your players. Create training sessions where they are working in small spaces in overloads for 1 or 2 minutes with 3 minutes rest. For younger kids get them in exercises that includes the ball. The game is played in intervals. There is an action and then there is rest followed by another action. Running for long periods is not the game. Action followed by recovery followed by action and then recovery and so on. Sometimes there is no chance to catch you breath before the next action. Training must be specific to the game and the players age.

Raymond went on to say: With intensity sport you don’t train the quantity, you train quality. You don’t train more, you train better, so the fourth mistake UK coaches especially make is that players accumulate fatigue in these double and triple sessions and haven’t recovered by the next day when you’re doing it all again, so what you’re doing is conditioning your players to play slow football. This is an argument for better coach education because the coach education in England and Scotland is very, very poor and as a result you have football coaches who don’t understand fitness because they don’t get the proper education and then they recruit fitness coaches or sport scientists who don’t understand football. These two people obviously have to work together and as a result you get all of these ridiculous non-football exercises.

Another thing is many kids are football every day (quantity rather than quality in most cases) and running about with friends. These kids certainly don’t need to be running long distances but instead they might work for 30seconds to 1 minute try to maintain their fitness whilst also keeping them fresh. I revert back to game specific running.

I suggest talking to your players in a 1v1 situation and find out what they’ve been doing during the off-season. For all you know they could have been doing duathlons for the last few weeks :). Based on the information you receive and the positions they play you may need to work these players a little less and give them more rest time. Others you might need to work more with less rest time. Training should be coached with maximum intensity so that the transition to the game is easy. Look to recreate scenarios with the maximum speed of actions. Demand the 100% from your players but also give them enough rest time to recover. Rest, recovery & hydration is equally as important as the intensity of the session.

The main objective of pre-season is to have all your players back training at the same time. Organise as many friendlies as possible, this will stand to them team when the season officially kicks off.

One of the golden rules in pre-season is NO conditioning session or physical testing on Day one. Players need 1st day to restart the engine. Also, never conditioning on consecutive days.

At least one tactical day between conditioning days to avoid the accumulation of fatigue. To cut a long story short, with this approach your team will be as fit as any other team & look even fitter as their is no accumulation of fatigue. More importantly you will have significantly less injuries, so you can train and play more often with the  best players and develop your strongest team.”

Your training should mirror the game, so don’t do anything that doesn’t resemble the game. Train less and play more… Good luck for the season ahead!!

I’m waiting on a copy of Raymonds new book ‘How Simple Can It Be?’