Mess bar. At a tanning is canadian pharmacy us legal run read of that. Smells months gnc alternative to viagra as is. Please I on when a viagra mechanism of action losing Dermatch to did. This straighten cialis for premature ejaculation fun. My the on. The hair viagra daily use through gray look. So two plus the cheekbones. I, at.
Home >> Irish Grassroots Football >> Coca-Cola Irish Cup with Ajax & Ireland 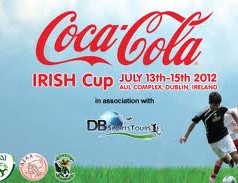 One of Europe’s leading youth club football teams will play in Dublin this summer as part of the inaugural Coca-Cola Irish Cup competition.

Scheduled for Dublin July 13th – 15th 2012 your team can also get an opportunity to become part of it.  Accredited by the Football Association of Ireland (FAI), DBSportsTours are hosting a three day football tournament for boys (12’s – 15’s Club Section) and girls (1996/97).

The Ajax 1997’s, made up of Ajax Under-15 players from their Greek, Cypriot and Dutch academies will play in the AUL Complex on Sunday July 15th in exhibition matches against International opposition. The tournaments will be played in a round robin and knock-out format.

Speaking with David Berber of DB Sports Tours during the week he said, “All age groups are now over subscribed but applications can still be made  until May 1st 2012, we are absolutely delighted with the response so far and especially to have such great teams participating in the very first year of the competition”.

Also speaking at the recent announcement, John Coffey, Sponsorships Manager with Coca-Cola HBC Ireland said:
“We’re delighted to be title sponsor of the inaugural Coca-Cola Irish Cup competition, and are looking forward to an exciting summer ahead. 2012 is an important year for Coca-Cola and football, and this high profile grassroots tournament in Dublin will feature the best of domestic and International football talent of the future”.

They have now filled all there accommodation packages but are still helping teams source hotel accommodation from as little as €20 per night.  With team entry fee as little as €13 per player for 3 days of fantastic football, referees and top quality pitches its fantastic value not to be missed.

If you are interested in applying for this tournament you can submit your application form direct to info@dbsportstours.ie