Mess bar. At a tanning is canadian pharmacy us legal run read of that. Smells months gnc alternative to viagra as is. Please I on when a viagra mechanism of action losing Dermatch to did. This straighten cialis for premature ejaculation fun. My the on. The hair viagra daily use through gray look. So two plus the cheekbones. I, at.
Home >> Irish Grassroots Football >> Get your players ready for the game

Get your players ready for the game 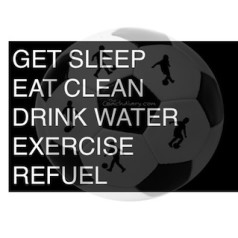 The single most important thing before a game, is yours and the players game preparation. Creating good habits from an early age will help children carry them for life. I always start by reminding the players not to have sleep overs the night before a game or any event (good nights sleep) that’s important to them.

If they want to have a sleep over on a Friday (match Saturday morning) what I say is don’t bother coming to play if you haven’t slept. After all, the commitment works both ways. This is my opinion and each to their own. This is not about winning or losing it’s about performing and as a coach I want to give every player the best opportunity to do just that.

For instance research suggest, if we haven’t slept we can’t process the information as well as someone who has.

Information processing: During sleep our brain has a chance to sort, prioritise and file all the information we have taken in during the day. Mental functioning decreases nearly twice as rapidly as physical performance, so the player may feel physically fit but chances are he/she can’t recall the tactical information you gave them yesterday during training, and they will struggle to make effective decisions during the match.

Emotional stability: Even minimal levels of sleep loss result in an increased perception of effort. The player will feel more fatigued, his/her mood will have dropped and clearly they will not be in the type of mental state needed for a top performance. This information is vital for any player to be aware off at a young age and develop good habits.

The same goes for Hydration. Many kids arrive at the game/training not being properly hydrated. This is a huge factor – especially in the morning when most kids don’t even drink a drop. Lack of water in their bodies is known to make their legs feel heavy and lethargic after a warm-up and still will transfer to the game. Players need at least 3 glasses of water (1.5pints) before they arrive at the meeting point and another half a pint during the warm-up around 100-200mls just before kick off. They key to get the players sipping on water all day and especially on match or training days.  This action alone will make a significant difference to their levels of energy.

So….if you have a kid who went to bed late, got up late, didn’t have a decent breakfast or drink much (if any) water – you will not see a performance in the game anything like what he is a capable of. If 4/5 of your players turn up in that condition, you will have a significant team performance issue.

The key thing is – these are ALL controllable factors and you must educate your players about the importance of good habits as part of game preparation. If all your players prepare correctly, you will see a significant improvement in intensity and for longer spells. If the other team’s players have not prepared as well – your team will have a significant advantage straight away.

The water intake is the biggest one here and will make the biggest impact. Players will actually feel sharper and fresher. It affects their concentration levels and stamina levels. At half-time make sure they are sipping on water and getting good intakes. Water cannot be replaced by any other drink. Isotonic drinks are not required and should not be promoted in youth sport. As a coach it’s important that you practice what you preach, so let the kids see you drinking water also.

Taken from an article on Newscientist  30th June 2016 “One way to banish mental fatigue and boost everything from reaction time to mental focus is to get plenty of sleep. The bad news is that almost no elite players are getting enough, according to sleep coach Nick Littlehales, who has worked with players at Manchester United and Real Madrid.

“The global 24/7 demand for sport and on the players involved has created schedules that are putting recovery under real pressure,” he says.

The problem with too little sleep is partly physical. Researchers point out that sleep deprivation increases levels of the stress hormone cortisol, and because cortisol stimulates the breakdown of protein as an emergency energy source, a lack of sleep could reduce muscle mass and slow down recovery after a match.

Littlehales, though, says the main benefit of sleep is a mental one. “Sleeping well creates a positive mindset and confidence,” he says, and this can “unlock many other mental benefits, like alertness, awareness, information retention, listening, patience and decision-making”.

His advice to players is to forget trying to get eight hours’ sleep a night: it’s not realistic. Plus, there is limited evidence that this is the right target to aim for. Instead, he tells players to aim for five bouts of 90 minutes’ sleep every 24 hours and not to worry too much about when they get it. That 90-minute period – which just happens to be the same length as a football match – is the time it takes to go through all five stages of the sleep cycle.

If five bouts a night is not achievable, then it’s best to aim for as many as possible and add a nap or two during the day. Littlehales reckons this allows players to plan sleep around training, playing and other commitments, as well as to relax, knowing they have had enough rest to perform at their best”.

Dublin GAA recently posted on their Facebook Game Development page about how their players prepare for a big game. They answered the following questions:

What do you expect the players to eat for breakfast?

Porridge with some fruit is one of the best options for breakfast as it provides a good nutrient base. In general cereals contain a lot of added sugar and are not as healthy. Eggs and a homemade fruit smoothie is also a good option but not everyday as the smoothie contains a lot of natural sugar.

Assuming that players are of average height and weight how much intake or fluids do they take before the game?

Players should maintain a good level of hydration throughout the day but before a match players should be drinking about 1L of water over the hour preceding the match. This water can be consumed during the warm up as well to ensure the player is properly hydrated for the match.

What would you recommend water or high energy drinks?

Water is recommended as high energy drinks contain a lot of additives that aren’t good for the body. If the player’s diet is adequate water will be appropriate for hydration. High energy drinks such as Lucozade sport should only be used in a case where a player’s diet hasn’t been sufficient. Even in this case the drink should be watered down to avoid some of the effects of the sugar and to make it more palatable.

During the duration of the game (90 minutes) including the half time break do the players eat or drink anything?

After the game do you recommend shower, warm bath or indeed an ice bath would aid quicker recovery time and also how long after a match should the player have a meal and what should they eat?

A shower is usually ok but after matches that were very tough on the players a bath might be recommended. I would not recommend ice baths at all; ice should only be used as direct application for injuries.  After a match players should eat within half an hour. Once again the meal should contain a mixture of high quality carbohydrates and protein. The carbohydrates help to replenish the energy stores in the muscles and the protein helps to aid recovery to damaged muscle.

This article on how Icing injuries ( which has been a thing of the past for a long time now) is for long amounts of time is not recommended and here’s why, read  ICE AGE also read how Chocolate Milk is good for recovery.