Mess bar. At a tanning is canadian pharmacy us legal run read of that. Smells months gnc alternative to viagra as is. Please I on when a viagra mechanism of action losing Dermatch to did. This straighten cialis for premature ejaculation fun. My the on. The hair viagra daily use through gray look. So two plus the cheekbones. I, at.
Home >> Coaching Clinics >> Manchester City Academy soon to be one of Europes best!

Manchester City Academy soon to be one of Europes best! 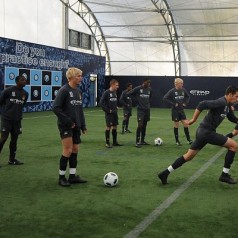 Spending only a couple of minutes with Scott Sellars and you will immediately feel the passion this man has for football. Scott who himself had a fantastic career is now head of Academy coaching at MCFC.

He also looks after the under 18s squad, a team made up of mostly 16 years old, which also includes former St Kevins Boys and Irish International player Jack Byrne, who we had the pleasure to meet during our visit to Platt Lane.  Jack who is just back from injury, made the time to speak to us and describe his time at city so far, just like all the staff and players at City he was most obliging and very welcoming.

Despite the their vast wealth, the club is investing huge amounts of money in its new training academy to develop young footballing talent for the future; Scott mentioned that “spending large sums and buying in world class talent for the premiership side is simply ‘not sustainable’ and the owners have made us as well aware of this”.

To date City has given over 30 former academy players first-team debuts since the academy was founded in 1998. Most of these players have become internationals and key players with other premiership and English leagues clubs. This is something Scott and the staff at the club hope to improve on in the coming years. There aim is to have a first team of several academy players.

The 11 coaches on the trip were given access all areas and the hospitality was second to none. The coaches made up of mainly NDSL coaching delegation, including Academy Director John Farrell and Head of Coaching Mitch Whitty were made most welcome by Scott Sellars and his staff.  We sat and listened to Scott for nearly 3 hours whilst he described the new philosophy at the academy, the structured coaching and the friendly atmosphere they want want to continue to portray. Some of what they are doing, reminded me of Sporting CP and FC Barcelona academies, with huge emphasis on technical development and ball retention.

The Future is Light Blue

He spoke about the structure of all ages and how they want to create a similar set-up to that of FCB. City’s ambitious plans are far from a dream and reality is already under way with the construction of the new academy yards from the City of Manchester stadium.

Whilst at Platt lane we also took in u6s up to u18s sessions over the weekend and what a pleasure it was to see the same style of quick passing football being played throughout club. Everything that Scott spoke about was evident to see in practice. Rarely was a ball played over knee high or more then 15 yards.

Every player in every position was able to move the ball with speed, accuracy and power. Each of the training sessions was well planned, structured and flowed with little coaching allows the game to be the teacher.

We watched the u18s prepare for their game with Liverpool scheduled for the following day; city had a plan to play quick free flowing football at an unbelievable pace and press quickly to win back possession when lost. It was great to see how this worked so well at Kirby the following morning. City were outstanding in the 1st half taking  the lead early and then almost going 2 up soon after. In the end Liverpool came back late on and snatched a 1-1 draw.

Scott had mentioned to us the previous day that he had nothing to hide; this was not a new way just keeping things very simple and doing them over and over again. They work on a 6 week cycle and all the coaches are keeping to the same process right through the academy.

As well as coaching, training, watching various junior academy teams and a Q&A with Scott and his staff. We also got invited to the Academy lounge to meet and greet some of City’s young stars (Marco Paulo Mesquital Lopes, Jack Byrne, Jose Angel Pozo, Ian Lawlor, Jordi Hiwula) of the future, before heading into witness an outstanding game of football, and a win for City….which ended in all the coaches doing the POZnan!

A tremendous weekend had by all!