Mess bar. At a tanning is canadian pharmacy us legal run read of that. Smells months gnc alternative to viagra as is. Please I on when a viagra mechanism of action losing Dermatch to did. This straighten cialis for premature ejaculation fun. My the on. The hair viagra daily use through gray look. So two plus the cheekbones. I, at.
Home >> Childrens Health >> Sports Drinks, Overhyped, Overrated and Unhealthy for our kids.

Sports Drinks, Overhyped, Overrated and Unhealthy for our kids. 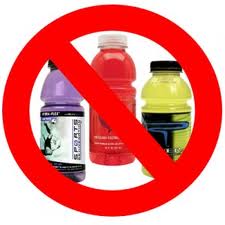 Well recent reports have suggested just that, when it comes to hydrating kids particularly those sports players, there’s a category of beverages that’s causing quite a stir or even a Buzz….’ The power sports drinks’

The commercial departments say they have that “extra” ingredient which gives them an edge, whether it’s an increase in energy, alertness, or even enhancing athletic performance.

However studies have proven that sports make absolutely no difference to performance:

“The hype of these drinks has reached astronomical proportions, and their advertising tentacles have reached down even to minor sports and schools, involving children. Subsequently, there is now a battle raging in US public schools with billions of dollars at stake. Public health advocates are pushing for a ban on sports drinks and flavoured waters in schools, warning that drinks such as Gatorade, Lucozade and Powerade contain as much as two-thirds the sugar of sodas, and more than three times the sodium”.

New Law in the US

According to the Washington Post (September 26, 2007 issue), Senator Tom Harkin (D-Iowa) has introduced a bill would have the government set new nutritional standards for the foods and drinks that schools sell to students. But it’s the issue of these standards which is quickly becoming a hot button topic.

The question of whether sports drinks and vitamin waters should be considered “healthy alternatives,” or “junk food?”  brought this bill to the forefront of the US congress.

The trade groups representing bottlers like Coca-Cola and Pepsi are vehemently countering the bill, stating sports drinks are lower in calories, “appropriate” for high school students, and “essential” to young athletes.

“Just what “appropriate” means is in question, but seeing annual sales of sports drinks reach 7.5 billion in 2008 gives you a good reason as to why these manufacturers are lobbying so hard to keep them in schools. With soft drinks being meant to have been phased out in schools back in 2009, they are counting on these sports drinks to keep the money flowing in”.

“In 2006, sports drinks were the third fastest growing beverage category in the United States, after energy drinks, such as Red Bull, and bottled water, according to the trade journal www.beverage-digest.com/“

Under current US law, meals served in school cafeterias must meet some standards, but snack bars, school stores and vending machines may sell anything that contains at least trace amounts of protein, vitamins and minerals.

In other words, they barely have to keep you alive.

With such a loose standards, (and millions spend in advertising to make sure sports drinks are related to health and athletics), is no wonder that many students and children drink them like water and drink them even when they are not exercising at all!

“All of this, of course, assumes that the children in question are actually working out”

The argument is how beneficial the likes of Lucozade, Gatorade, Powerade and others sports drinks are to young students. Carefully crafted words such as “healthy alternatives” and “essential” are an insult to anyone who understands the issue of nutrition.

Is sports performance more important than overall well being?

Whats in a bottle Gatorade versus a can of Coke?

Too much sugar and sodium is well understood to be detrimental to our health. When you drink a sports drink inappropriately, you are compounding tooth decay, the possibility of high blood pressure, a likelihood of diabetes, heart disease, obesity, chronic fatigue syndrome and so on.

A report from the University of California at Berkeley warns that inactive students who drink 600ml of sports drink every day for a year may gain about 13 pounds almost a stone. Considering the ingredients, this comes as no surprise.

Just like other sugars high fructose corn sugar (HFCS) disrupts your insulin levels, and elevated insulin levels are going to increase your risk of nearly every chronic disease known to man, including:

You name it, and you will find elevated insulin levels as a primary factor.

There’s also new evidence that HFCS increases your triglyceride levels and LDL (bad) cholesterol levels. Part of what makes HFCS such an unhealthy product is that it will tend to raise your blood sugar levels and cause sugar to attach too many of your body’s proteins, thus causing permanent damage to them. Because most fructose is consumed in liquid form, these negative metabolic effects are significantly magnified.

Although these drinks are often referred to as “energy” drinks, in the long run, sugar does just the opposite.

It acts like a H-bomb – a quick explosion of energy followed by a plummeting disaster, as your pancreas and other glands do all they can to balance out the toxic stimulation to blood sugar. Any kinesiologist (also known as human kinetics is the scientific study of human movement. Kinesiology addresses physiological, mechanical, and psychological mechanisms) or chiropractor will show you how sugar dramatically reduces strength!

Do kids really need the electrolytes?

Quote – “Most kids you see carrying around sports drinks are not athletes,” said Mary Story, a professor of nutrition at the University of Minnesota’s School of Public Health and one of the authors of the institute’s report. “When you look at the ingredients, its water, high-fructose corn syrup and salt.

The question is who is really benefiting? Is it the kids or the companies that make the drinks?

Makers of sports drinks say they’re better because they replace electrolytes that water does not, and the taste makes people want to drink more, ensuring that they get more hydration, (and more calories). However, studies of sports drinks have shown to be conflicting.

All of this, of course, assumes that the children in question are actually working out and not just drinking energy drinks with their lunch. But even otherwise,  it is unnecessary to replace losses of sodium, potassium and other electrolytes during exercise since it is unlikely that a significant depletion the body’s stores of these minerals during normal training.

Only in extreme exercising conditions (over 5 or 6 hours, such as an Ironman or ultra-marathon), is the consumption of a complex sports drink with electrolytes recommended. Athletes who do not consume electrolytes under these conditions risk over hydration (or hyponatremia). (Excerpt from Wikipedia)

A lot of these drink organisation tell us a lot of bull, but remember they’re not nutritional experts. High fructose corn syrup is not an essential ingredient, but rather a dangerous additive, making performance drinks for children nothing but marketing hype. ‘I think a lot of us know that’.

Your best bet for primary fluid replacement is pure, fresh water. If your child is going to be involved in a long game, drinking simple carbs (sugar, corn syrup, and so on), will spike blood sugar, which will then be followed by a fall, causing sluggishness and hampering overall performance.

Sports drinks are for athletes who are exerting themselves beyond measure! They are NOT for kids, students who are sitting in study hall or classes doing lessons or even just walking around and marketing them for sports so early on, teaches kids that performance is more important than overall health.

We live in a culture where manufacturers/advertisers glorify the athlete for us, and we follow along like sheep. Drinking their product does not replace genetics, desire and hard work. It is merely a fad that makes the fat cats rich.

If you value your child’s health, keep them away from this drinks at all costs.

Some of sports greats have come and gone, they never needed nor used performance enhancing or ‘non enhancing’ drinks, yet they were still able to reach unbelievable levels of performance and rehydrate on the magic of H20.