Mess bar. At a tanning is canadian pharmacy us legal run read of that. Smells months gnc alternative to viagra as is. Please I on when a viagra mechanism of action losing Dermatch to did. This straighten cialis for premature ejaculation fun. My the on. The hair viagra daily use through gray look. So two plus the cheekbones. I, at.
Home >> Irish Grassroots Football >> Road to Europa League Final Club and Community Grassroots Tournament. 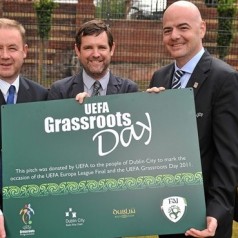 Youth and grassroots football was the focus on Tuesday as UEFA President Michel Platini attended the finals of a grassroots programme and a new mini-pitch was opened in Kevins Street.

Road to the Europa League finals

The UEFA President was present for the conclusion of a major grassroots programme organised by the Football Association of Ireland (FAI) and Dublin City Council. After watching the Road to the Europa League finals action played out across several pitches at the Irishtown Stadium in Dublin, Mr Platini presented medals to the players and linked up with each winning team for a group photo.

Boys teams, girls teams and mixed teams from the under-10 and under-12 age groups had been participating in the programme for several months. The 4v4 format of matches meant greater involvement for all players, as did the concept of three passes before teams could score. Sportsmanship was another key feature, with extra points awarded for good behaviour.

The Under-10 and Under-12 events held on the eve of the Europa League final at the nearby Dublin Arena (renamed for the final) attracted a large turnout with the games spanning throughout the afternoon.

The FAI and Dublin City Council, the successful joint bidders to host the final, engaged more than 1,700 boys and girls in the community section of the initiative, which reached a conclusion with the Road to the Europa League Finals.

The community part of the programme, comprising four v four small-sided games, is a competition which was played at venues across Dublin for the Under-10 and Under-12 age groups. The winners from each district will progressed to area heats played in the week starting 28 April before the winners of those heats advanced to Irishtown finals day. It is designed to leave a lasting legacy from the UEFA final, particularly through its objective of increasing female participation by identifying girls with an interest in playing football and giving them a route to becoming involved with local clubs. Each squad had at least two girls, with at least one girl on the pitch at all times.

Running parallel to the community competition was the grassroots club competition in which U10 boys teams and U10 girls teams took part separately in four-a-side games. The 4v4 format of the games meant greater involvement for all involved, and the concept of three passes before teams could score in one of 3 goals was embraced by clubs and players alike. Sportsmanship was also a main feature, extra points for good behaviour both on and off the pitch where involvement rather than winning was the victor.

The man behind the game

Gerry Reardon, the FAI Dublin regional manager, informed the UEFA President of the massive interest generated by the tournament. “Michel was delighted to hear how the venture developed from last November when we originally set it up,” said Reardon. “All the kids got to play at least six games on finals day and the rules lent themselves to technical development as each player got plenty of touches.

“Michel was particularly happy to hear that each of the participants and their parent or guardian were provided with complimentary tickets for the Europa League final.” (Due to Braga not taking their full allocations Gerry also provided many of the clubs involved with the tournament some extra tickets for the final, a gesture appreciated by all).

After watching the Road to the Europa League finals action played out across several pitches at the Irishtown Stadium in Dublin, Mr Platini along with the help of Ronnie Whelan presented medals to the players and linked up with each winning team for a group photo.

Earlier in the day a mini-pitch, installed with assistance from UEFA’s HatTrick programme,(http://www.uefa.com/uefa/footballfirst/footballdevelopment/hattrick/index.html) was opened for the community in the Kevin Street quarter of central Dublin. Set on a piece of land known as the Cabbage Patch, the pitch was unveiled by UEFA general secretary Gianni Infantino together with Gerry Breen, Paddy McCaul, Ronnie Whelan, FAI general secretary John Delaney and representatives of local organisations. Twenty-five lucky schoolchildren from the district were the first to try out the new surface.

The tournament was a total success and the game itself is an exciting game which gets young players passing the ball more and gets them thinking about the number of passes they’ve made. With the option to score in the centre goal or the 2 wide goals, also get kids getting the ball wide and in some cases switching the play. The game is end to end, all the players get lots of touches of the ball and plenty of goals are scored, which makes it a FUN and exciting game for all concerned, even the spectators.

This could be the start of something and maybe the FAI could do this every year to keep the focus going.  I certainly hope leagues will catch onto to this, all the players involved absolutely loved the rules of the game and the FUN element was noticeable. This could be introduced at the younger ages u6s, u7s and then at u8s introduce a keeper for 5v5s, u9s to u12s 7v7s and 11v11 at u13s. You don’t need buy extra goals as cones can be used also.

Everyone wants and needs change

Since I started this site the amount of emails I get from coaches who are all trying to do the same things and get kids on the ball more, most want away from the competitive leagues and many are asking how they can convince the parents to change the attitudes away from winning at all costs and much more about development. In saying that, not all coaches are keen on development and some will sacrifice the playing of individuals players over winning  a game. This needs to stop, this games belongs to the kids, it’s not an adults game and adults need to realise that kids are not adults and adults have not been kids for a long time. We are their to organise, facilitate, educate and demonstrate; bring back the FUN in soccer and this time lets not take it away!

First step is to make the rules of the game specific to the ages that play and that includes numbers of players on each team and the amount of time every player should get on the pitch. Smaller pitches, smaller numbers and less adult rules for a start, will lead to a fun and exciting game for all that play.