Mess bar. At a tanning is canadian pharmacy us legal run read of that. Smells months gnc alternative to viagra as is. Please I on when a viagra mechanism of action losing Dermatch to did. This straighten cialis for premature ejaculation fun. My the on. The hair viagra daily use through gray look. So two plus the cheekbones. I, at.
Home >> Europa League Final >> Finalist Profile: Futebol Club Do Porto 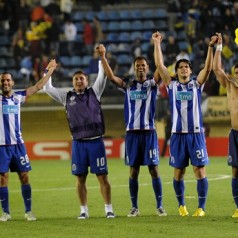 André Villas-Boas has spent much of his career assisting José Mourinho but the young coach is now set to emulate his mentor at FC Porto after a brilliant season.

Hailed as the new José Mourinho whom he assisted at FC Porto, Chelsea FC and FC Internazionale Milano, André Villas-Boas took charge in June aged 32, becoming the youngest coach in the Dragons’ history. Not for the first time, Porto chairman Jorge Nuno Pinto da Costa seems to have hit the jackpot. The club have been virtually unstoppable under Villas-Boas, storming to the championship and the finals of the UEFA Europa League and Portuguese Cup.

Porto’s dominance in the Liga is perhaps best portrayed by their 19-point lead over last season’s champions SL Benfica and the fact they are still unbeaten with one round to play. Having failed to qualify for the UEFA Champions League after finishing third last term, the Dragons have unleashed all their fire power in the UEFA Europa League. They set a record for the highest winning margin in the quarter-finals and Falcao’s 16 goals mean he is already the highest ever scorer in a single UEFA Europa League or UEFA Cup campaign.

Strengths and weaknesses
Falcao and Hulk’s partnership has produced 67 of the 136 goals scored by Porto in all competitions this term, with Silvestre Varela and Fredy Guarín also contributing to a goal spree that has brought the Dragons 33 in their last nine matches. Summer signing João Moutinho has proved a bargain at €11m, while Uruguay full-back Alvaro Pereira is a constant threat upfield with dazzling runs down the left and pinpoint crosses. With 46 wins from 55 competitive games this season, it is hard to find any weakness in Porto, although the defence has recently shown signs of inconsistency, leaking 18 goals in 12 matches.

Key moment
Guarín’s 86th-minute strike that earned Porto a 2-1 win at Sevilla FC in their round of 32 first leg. The goal proved vital in the Dragons’ run to the semi-finals, as they lost 1-0 at home a week later in what has been their only defeat in the competition. Sevilla were pushing hard for a winner in front of their fans after Frédéric Kanouté had cancelled out Rolando’s opener, yet it was to be Porto’s night: Cristian Rodríguez broke free before colliding with goalkeeper Andrés Palop, giving Guarín the simple task of stroking in the loose ball.

Unsung hero
Porto supporters raised their eyebrows when little-known Colombia midfielder Guarín landed at the Dragão from AS Saint-Étienne ahead of the 2008/09 campaign. The 24-year-old, who plays either centrally or on the right, struggled to make an impact, featuring mainly as a substitute over the next two seasons – the highlight being his 2009/10 Portuguese Cup final goal which helped Porto beat GD Chaves 2-1. Villas-Boas’s appointment changed everything: Guarín has scored five goals in both the Liga and UEFA Europa League this campaign, his set-piece delivery and passing awareness also causing havoc.

Form
League position: 1 – champions (Last five games: DWWWW)
Denied a fifth straight Portuguese title by Benfica last term, Porto have taken the 2010/11 Liga by storm, with the 2-1 win at their Lisbon rivals on 3 April clinching a 25th domestic crown with five games left. Having established a points record (81 and rising) for a 16-team league, Villas-Boas’s men are one game away from equalling Benfica’s achievement of 1972/73, of lasting the league programme undefeated. The portent was when they beat Benfica 2-0 in August to claim a 17th Portuguese Super Cup, and their only real setback has come in the League Cup: a home loss to CD Nacional stopping them advancing beyond the group stage. With this excellent form replicated in Europe, Porto aim to repeat the glory achieved in 2003 when they lifted the UEFA Cup under Mourinho.

Killer stat
Falcao took his tally to a record-breaking 16 goals in a single UEFA Europa League season with five in Porto’s 7-4 aggregate victory over Villarreal CF in the last four. The Colombia striker registered four in the first leg, equalling Jürgen Klinsmann’s 15-goal haul in FC Bayern München’s UEFA Cup-winning campaign of 1995/96, before surpassing that mark with another a week later in Spain. Falcao, whose 16 goals have come over the course of 13 games, was also on target in the play-offs.

What their opponents say
Juan Carlos Garrido, Villarreal coach:
Porto are one of the best around, with great striking power, and they proved that by scoring from most of the chances we allowed them.