Mess bar. At a tanning is canadian pharmacy us legal run read of that. Smells months gnc alternative to viagra as is. Please I on when a viagra mechanism of action losing Dermatch to did. This straighten cialis for premature ejaculation fun. My the on. The hair viagra daily use through gray look. So two plus the cheekbones. I, at.
Home >> Coach Talk >> CoachTalk: Ray Power 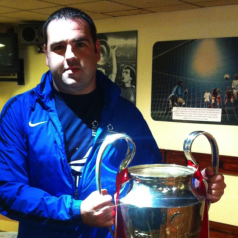 This week I spoke with Irish Coach Ray Power. Another Irish Coach making his way across the water.

Ray is a 31-year old, A Licence football coach. Although from Waterford, Ireland he is currently based in Nottingham, England.

He is currently working as an Academy Manager full-time with under-19 players at Conference/Football League level and he is also a coach education tutor for the English FA.

TCD: When did you start coaching?

RP: I came to England in 2007, following two years as a teacher in Switzerland. I had dabbled in grassroots coaching prior to arriving in England, but once here I began working in the Academy system.

TCD: What is your coaching style and how did you develop it?

RP: That’s a difficult question to really pin down. I suppose it has evolved through the years and I guess it is still evolving – I think it has to. My style comes from me as a person I guess. I like to create a positive environment where the focus is on the players learning, so is player-centred rather than being all about the coach. Therefore I like to use methods like Q&A and Guided Discovery where possible, as well as Skilful Neglect. If it’s optimal for player learning to be more command-like, I’ll use it, but this is very occasional.

All the work we do is based around the game. That sounds a little obvious but you would be amazed at the amount of coaching sessions where players are involved in activities that are barely football-specific! Everything involves a ball, and puts players in situations they will find themselves in come match-day.

TCD: Have you any mentors and if so, who?

RP: Loads – whether they know they are mentors or not! When I fist came to England, Steve Welsh at Boston United gave me my first opportunity to coach academy players and I learned lots from Welshy – about the game, but also about presence and manner with players. The one that comes straight to mind however is Dick Bate. Dick is now at Cardiff City but was the head tutor on my A Licence. He was so knowledgeable and immersed in the game that you felt that if you could get anywhere near his level then you were on the right track. Otherwise I’m a bit of a magpie – I pinch ideas and traits from others that I incorporate into my work.

TCD: What are the most important traits of the modern coach?

RP: I devoted a whole chapter of Making the Ball Roll to this, but the traits are virtually endless. We all know – or should know – that we as coaches are role models and teachers, but being a modern coach is that and more. First of all you need to know the game – the modern game. We need to produce players that can cope with the evolving nature of football. So, for example, rather than coaching strikers to play in a 1980s style ‘big man, little man’ system, they need to be able to play as a lone striker, be more multi-purpose – added to evolutions like false 9s, inverted forwards etc.

Coaches also need to embrace technology (this is the world of our young players), use appropriate learning and coaching styles etc.

“SKILLFUL NEGLECT” The art of knowing when to do or say NOTHING. Because YOU know that THEY know the answer and they will work it out!

TCD: What part of the game do you prefer to coach?

RP: In recent years I’ve adopted a model known as Tactical Periodisation – something we speak about in the book. This involves practices and games that are simultaneously technical, tactical and physical. Simply because the game involves exactly that – all at the same time.

Players need to be worked with in all areas – attacking, defending and transitions so I suppose if I favoured one area I wouldn’t be doing my job correctly. If they leave the system having improved across all areas then I’m satisfied.

TCD: What kind of player to you prefer to coach. A technically gifted one who lacks work rate or a good player with excellent work rate?

RP: For too long we have prized the worker over the technician. Hard working ones were praised (and rightly so!) but any tricky players get lambasted for doing too much. Obviously to be successful a player needs both. Every individual though will have different needs, and therefore a different programme of work, targets etc. As a team game you need both. Look at Jordan Henderson. He’s a decent technician but is vital to Liverpool as his work rate allows the technically gifted players like Suarez and Coutinho the freedom to express themselves.

It’s easy maybe to teach a young player to run around all day, but he’s obsolete if another player has work rate AND technique.

TCD: What’s the future of the grassroots game in the England and what changes are happening or need to happen in order to develop players with game intelligence?

RP: Youth coaching in England gets a lot of stick – and maybe justifiably so in some parts. But change is afoot. There are lots of good people leading a drive for a better standard of grassroots coaching, through coach education, mentoring and books like Making the Ball Roll.

Like I mentioned above, players need to be put in game situations. Game intelligence can only come from constantly solving real-game problems. We have a big issue in this area. Players are often put in sessions where they warm-up by running laps of the pitch, then stand in queues to either pass or shoot. There’s very little decision-making involved in unopposed ‘drills’ like these so when players are in games, they can’t solve problems once opposition are in place and a game is going on around them at 100mph. I also believe we are ‘two-touching’ the flair players and dribblers out of the game by constantly putting ALL our players in two-touch games, when they need it or whether it’s their style or not.

At youth level if we can take focus away from match results, allow players the true freedom to express themselves and place them in game situations regularly, this can only improve.

TCD: Tell me about your book, what is it about and what inspired you to write one?

RP: When I started coaching I had to go to hundreds of different places to find what I wanted – books around technical practices, tactics, physical development – others about psychology and communication; conferences around Talent ID and goalkeeping. What I wanted was a “one-stop shop” that included it all! So I wrote it!

The book has 15 distinct chapters that relate to different aspects of youth development – and added to by some wonderful stories from youth coaches. If the reader wants further information on psychology for example, then the chapter signposts them to the best sports psychology resources available.

Where can TCD readers get your book?

The book is available in the UK and US through amazon and via bennionkearny.com/power and The book depository website also distributes worldwide with free delivery.

Right, I’m off to buy my plane ticket to Lisbon…… Thank You UEFA!

I always like to hear your opinions and views. If you feel you have something to say and want to be the next coach on COACHTALK,  Please comment below or email me info@thecoachdiary.com If, you don’t have anything to add then please forward this on to a friend. As always, thanks for reading.