Mess bar. At a tanning is canadian pharmacy us legal run read of that. Smells months gnc alternative to viagra as is. Please I on when a viagra mechanism of action losing Dermatch to did. This straighten cialis for premature ejaculation fun. My the on. The hair viagra daily use through gray look. So two plus the cheekbones. I, at.
Home >> Coach Talk >> COACHTALK: Lisa Fallon 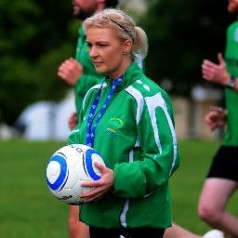 I met with Lisa for the very first time some weeks back and I was very interested in everything she had to say. I can certainly see her going places in the future. Remember this name Lisa Fallon.

Lisa is an ex footballer, a mother, a Sports Reporter, Senior Men’s First Team Manager at Lakelands FC (Leinster Senior League), Opposition Analyst Bohemians FC and also works with International teams and the Irish University Squad. Lisa is also the first female to manage a club within the LSL.

TCD: Did you play football before you started coaching?

LF: Yes, Played since I was 10 and finished up in 2010 when I turned 34. 24 great years of playing! Lisa played  with Southampton FC, Gillingham FC, Sittingbourne; St Patrick’s Athletic, Leixlip United, Riverstown.

LF: Seemed like a natural progression and probably stemmed from a frustration at some coaching I had seen children getting.

TCD: What is your role at your current club?

LF: Loads! Get kids playing 3v3 at 6/7 years old and keep them in SSG’s until U13. No results up to and including U13 to create a development friendly model. Make it compulsory for every child in a squad to play at least one half of their weekly game(s).

LF: To facilitate my players to reach their own potential through guided discovery promoting game intelligence. To get my players to play with their brains as well as their feet! To learn something new every day which will enhance the type of coach I am tomorrow.

LF: Yes, every person I meet in football is a mentor the moment they talk about and share their football experiences.

Every player I have ever coached has presented me with a different challenge and helps me grow as a coach. I welcome that and believe every player has a the right to be an individual.