Mess bar. At a tanning is canadian pharmacy us legal run read of that. Smells months gnc alternative to viagra as is. Please I on when a viagra mechanism of action losing Dermatch to did. This straighten cialis for premature ejaculation fun. My the on. The hair viagra daily use through gray look. So two plus the cheekbones. I, at.
Home >> Irish Grassroots Football >> Perfect Practice 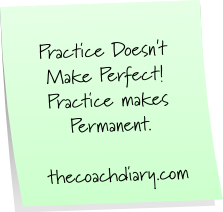 ‘Perfect Practice Makes Permanent, so make sure you strive to Practice Perfect’

Practicing has to become a habit for you to be successful. No athlete or coach ever got to the top without practicing and improving every-time he/she trained. The great late John Wooden always stressed, to do your best because that is one thing you can control and doing it each time (well) will give you success and satisfaction. Nothing is more important or satisfying then preparation for the game. Preparation is really where success truly lies. So when you practice, make sure you practice well and intentionally.

How many of us set training goals or targets each and every time we train and that includes making mistakes?

Here is a collection of lessons learned from John Wooden from ‘sources of insight.com’:

I’ve started to read a great book called Perfect Practice teach like a champion, the first few pages already have me hooked and inspired me to write this post today. In this video Doug Lemov talks about what they do:

In Practice Perfect, Doug, Erica, and Katie articulate 42 rules for designing practice that produces excellence. What are the goals that matter most to you? As Dan Heath writes in his foreword to the book, “To practice is to declare, I can be better.”

The message here is not to neglect the journey (training and preparing) in our anxiety to get better. As John Wooden also said, ‘Success and attention to details, the smallest details usually go hand in hand in sport and in life’