Mess bar. At a tanning is canadian pharmacy us legal run read of that. Smells months gnc alternative to viagra as is. Please I on when a viagra mechanism of action losing Dermatch to did. This straighten cialis for premature ejaculation fun. My the on. The hair viagra daily use through gray look. So two plus the cheekbones. I, at.
Home >> Academies >> Youth Academies key to success… 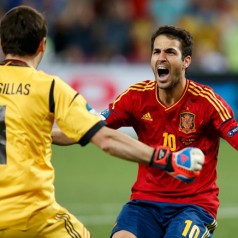 The success of the Spanish national team is mainly down to the efficiency of its clubs’ football academies and the high quality of coaching staff, coach Vicente del Bosque has said.

A day before the world and European champions bid to defend their continental title against Italy, Spain coach Del Bosque said the Iberian nation was experiencing “an incredible era” and was ready to become a leader in European football.

“(Our success) is not a coincidence and has its foundations in many things, in the structure of our football, in the academies, and in better coaches,” he said.

“The (Spanish) clubs are devoting themselves to training youngsters, some kids leave for foreign teams at a very young age,” he added. “Before we would travel abroad to look at the academies in France, Russia, Germany.

“Now many of these countries come to see what we are doing in Spain.”

Spain’s probable starting lineup for Sunday’s final in Kiev will include six players who are products of Barcelona’s youth school, five of whom still play for the Catalan club and one, Jordi Alba, who just signed from Valencia.

Del Bosque said Spain had finally worked out how to convert the dominance of clubs like Barcelona and Real Madrid in European competition over the years into success at the international level.

“We have put a certain complex regarding Europe behind us and right now we are at the same level as any country in our vicinity,” he said. “We are among a group of candidates to lead European football.”