Mess bar. At a tanning is canadian pharmacy us legal run read of that. Smells months gnc alternative to viagra as is. Please I on when a viagra mechanism of action losing Dermatch to did. This straighten cialis for premature ejaculation fun. My the on. The hair viagra daily use through gray look. So two plus the cheekbones. I, at.
Home >> Academies >> Braga are back in town

Braga are back in town 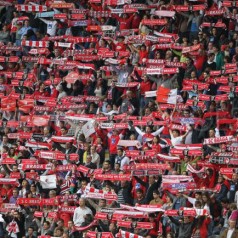 Hugo Vicente the Academy Director of Sporting Club De Braga is in town this weekend where he will be putting on a Portuguese style session at St. Francis football club. I’m looking forward to meeting him and brushing up on my Portuguese. Will be interesting to hear his opinions on the technical level of Irish kids compared to Portuguese boys and girls.

Braga are the 4th biggest club in Portugal behind Porto, Benfica and Sporting.

Sporting Clube de Braga is commonly known as Sporting de Braga or simply Braga. They play at the AXA Stadium which is also known as ‘The Quarry’ or the ‘Tool Box’. This is due to the design where the stadium is built inside a Quarry with cables attaching the 2 main stands. The ground was built for UEFA Euro 2004 and cost less then 60 million euros to built. In fact is cost 333million to build 7 new stadia and 77million to upgrade 3 more compare to 410 million it took to build the Aviva.

had been known as Arsenal do Minho and changed their kits from green and white hoops to their Arsenal style red in 1935. This is due to their coach, Jozsef Szabo, visiting and watching Arsenal at the old Highbury ground.
The emblem of Sporting de Braga is the city of Braga’s shield with Mother Mary and baby Jesus. On the top of the emblem is the golden Mural Crown of Braga, with the name Sporting Clube de Braga on it. Many fans of Braga have said that Mother Mary gives them luck. The Braga fans are known as “Arsenalistas”

Hugo comes to Ireland through DBSportsTours in conjunction with twsports