Mess bar. At a tanning is canadian pharmacy us legal run read of that. Smells months gnc alternative to viagra as is. Please I on when a viagra mechanism of action losing Dermatch to did. This straighten cialis for premature ejaculation fun. My the on. The hair viagra daily use through gray look. So two plus the cheekbones. I, at.
Home >> Coaching >> Possession is Nine-tenths of the Game – By Inside Soccer

Possession is Nine-tenths of the Game – By Inside Soccer 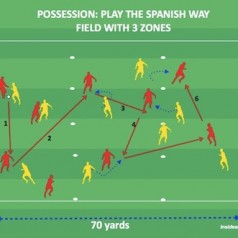 Why us possession games in training?

The most basic reason for using possession games in training is because they are CLOSELY RELATED TO REAL GAME SITUATIONS.

While there may be a compelling argument to hone technique with “choreographed” drills, it is in opposed situations where players have to problem-solve, analyze, decide and execute under pressure. Isn’t that exactly what happens in the game?

This is the type of method many clubs in Spain are using with their young players, because opposition and pressure is exactly what they will encounter during regular competitive games. And rather than small-sided games, its the multi-player game that is practiced, played on a bigger field, again because it replicates the real thing.

The rationale is that the real game is played by 22 players, so if as near that number is incorporated in the training sessions, then real game situations will be created.

In most games, no matter which teams are involved, the possession of the ball changes fairly continually. A team that attacks and loses the ball also loses the initiative and must adjust to regain possession as quickly as possible to re-establish control of the game. These changes are crucial for the development of the players’ soccer skills. The more players that are on the field means that players have to make quicker decisions and execute skills and techniques more rapidly. Isn’t that exactly what happens in games?

Indeed, players who operate in multi-player games must be capable of making instant decisions. The capacity to choose the correct option in any given situation is a crucial factor in the development of players. Those who need to get the ball to their feet before deciding what to do with it will not be very successful. On the contrary those who know what they will do with the ball before it even arrives, will stand out as having the necessary technical abilities to get to the higher levels of the game.

This is one aspect that truly defines the great players. The ones who can anticipate their opponents movements, are aware of their teammates positions and can execute skills with quality and precision. Consequently, young players must become accustomed to thinking before they receive the ball, and should, therefore, be continually put in situations where that is necessary.

We are all learning

One of the main features in training young players is that they must take responsibility for their own learning. As Horst Wein writes “ In modern and effective football training the developer/teacher replaces the coach/instructor, allowing the players to construct their own learning”

Coaches shouldnt try to dictate every movement of the players. Instead let them experiment and discover solutions for themselves. This method will reap rewards in the long run even if mistakes are made in the short term, which itself is something many coaches today must learn to handle effectively. Its the developer/teacher who will subtly control the level of difficulty, introducing variations to rules or dimensions at the right time, allowing players sufficient time to familiarize themselves with all situations.

Alberto Giraldez, for many years the Academy Director at Real Madrid points out “When constructing possession games its important for coaches to understand that the attacking team is often at its most vulnerable when they lose the ball. Thus emphasis on attacking play should be matched with a desire to get into a balanced shape once possession is lost”.

Accordingly, practice games should include such situations, allowing players to enjoy keeping possession, but changing the mentality and instilling a desire to win the ball back when possession is lost. Training games like these played at high intensity make it possible to work on attacking and defending principles simultaneously.

However, particularly at Real Madrid, Giraldez does go on to say,

“We do not encourage players to play just on instinct, physicality and energy…….what we want is the thinking player”

Most youngsters play soccer because they want to have fun. Some of the more “supervising” coach/instructors feel the need to impart their knowledge on the players, and so constantly stop drills and practices to tell the players what they know. What they fail to understand is that it is possible to play and learn at the same time. How many times have you witnessed players involved in drills far removed from the game itself, often standing in lines waiting to follow the coaches orders? In Spain, for many years, and obviously paying dividends now, the emphasis is on self-learning, motivation and hard work but having fun at the same time. Playing multi-player games stimulates all these aspects.

Most coaches agree that winning games is not the first priority for teaching young players. Particularly at the younger ages, the search for learning by playing well is far more valuable than the simple sum of three points for winning a game.

Therefore, the focus should always be on the satisfaction of playing well and working hard on development of the tactics practiced during the weeks.

** copies of the book, published in different languages, can be obtained by contacting:  jesus Gutierrez <susen_31@yahoo.es> mention my website for a discount.

TCD: This post was taken from Inside Soccer’s blog. I highly recommend this website, it has everything you need to know about coaching soccer.