Mess bar. At a tanning is canadian pharmacy us legal run read of that. Smells months gnc alternative to viagra as is. Please I on when a viagra mechanism of action losing Dermatch to did. This straighten cialis for premature ejaculation fun. My the on. The hair viagra daily use through gray look. So two plus the cheekbones. I, at.
Home >> Irish Grassroots Football >> Silent Sideline & Don’t x the line….Respect the game! 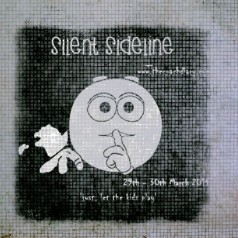 The weekend is finally here, so that means it’s Silent Sideline Weekend. Last year I tried to organise a Silent Sideline and got laughed at. That didn’t stop me!  This year after two months of non stop Silent Sideline PR, the weekend has finally arrived. With over 100+ clubs, thousand teams and 10,000+ players getting involved, this will be the biggest Silent Sideline ever organised in a single country (please don’t rain). Not forgetting the many teams from UK, Canada, Greece, Portugal, South Africa and even Brazil that are taking part. The way we coach in kids sport is changing….. Join the party!!

How is it going to work?

This weekend, make sure all the noise comes from the kids. Please chill out and watch them play. How you behave at seniors mens football match and how your behave at a kids football game should not even come close. Too many adults see it as the same thing. When I played football, we didn’t have all the adults attending games. We would be lucky to have even one. Over the last ten year more and more adults are arriving at kids sports games without a notion on how to behave. Adults don’t know what’s it’s like to play a game with 40+ people screaming their views of the game at you. I think if we did, we wouldn’t be behaving in such a barbaric and foolish way. Ultimately this weekend is about education the adults that it’s time to shut up and let the kids play.

“It was extraordinary,” “I went to about half-a-dozen games across the weekend and the best way I can describe the atmosphere was to say it was like going to a school play. The only voices you heard were children’s and the only contribution from adults was the odd round of enthusiastic clapping. It was completely unlike what normally goes on in our parks at the weekend.” Neil Yates The Lancashire FA’S County Welfare Officer after their recent Silent Sideline Weekend.

A few year back I went to the FCB Academy to watch Barca’s under 8s play. The kids played without any sound coming for the parents watching. The parents who attending training were told to watch from a distance and not instructs or even comment on how their kids were doing. Each parents is told to remain silent and observe. If they breached this rule their child could be evicted from the club. Amazingly the coaches also gave minimal instruction during the match and they would never direct whilst the player was in possession of the ball. FC Barcelona’s message is Play, Try, Grow and Improve.

Former Manchester United coach Rene Meulensteen, recently stated “that footballers cannot learn how to make their own decisions if they are used to receiving instruction from the touchline”

Without doubt the vast majority of parents mean well and want their children to be happy and successful. They are willing to sacrifice their time, energy and financial resources taxiing their kids to and from training, paying for additional training, volunteering for team and club functions and spending countless hours on the sidelines at tournaments and games. Unfortunately, far too many parents do not know exactly what they should and shouldn’t be doing to be the most helpful, they don;t know how to behave. Despite having positive intentions and their child’s best interests at heart, these parents say and do things before, during and after games that distract the child from focusing on the actual game, increase his/her anxiety level and, as a consequence, sabotage his/her overall level of play. Many kids eventually leave sport until adult life, due to this.

The five aims of the campaign are:

This weekend Referee’s in the LOI and English Leagues will be wearing the Respect T-shirts during the warm ups. The campaign is being supported by the PFA, The FA and FAI. @DXTL @PFA.

Mal Lee the founder of DXTL spoke to TCD recently:

“I was involved in grassroots football for well over 20 years; throughout those years I have witnessed first hand aggression, verbal abuse, racist comments, bullying, and now the smoking of illegal drugs on the touchlines of some Junior Leagues. Not just on Merseyside, but leagues throughout the Country, I have witnessed children crying because their parents are involved in fighting with the opponent parents, referees abandoning games and walking away from them, never to return to the game because of threats and abusive comments directed at them”.

Mal went on to say:

“Together we must protect our children and referees, and bring the sportsmanship and fair play back into grassroots football”.

The DXTL campaign in Ireland is run by Paul Martin from the FAI. Paul and the FAI have backed the Silent Sideline Campaign and see both as a great fit towards making kids football a better experience for all. If you want more information on the DXTL campaign you can email Paul Martyn at paul.martyn@fai.ie. The DXTL packs are also available for sale through Paul and currently being discount for the 10 year anniversary.

This weekend is going to be a big one with both campaign running side by side and having the support of the FAI and IFA is also very very positive. Looking forward to the next one already!!!!

Check out the little video I made for the Weekend. My first attempt at it, so hence the editing errors and not smiling enough. Like us all, I’m still learning! 🙂

Here’s to a dry weekend, no rain and no kids getting upset!